Cardano’s boss has also given his predictions about the launch date of the much-anticipated Ethereum 2.0.

There has been a lot of debate over when the Ethereum 2.0 will launch, as many people continue to give different dates on when the upgraded ETH blockchain will go live.

Several cryptocurrency experts, including the team behind the project, have made predictions as to when the entire crypto space should expect the rollout of Ethereum 2.0.

The latest digital currency expert to speak on the timeframe the cryptocurrency community should expect the launch of Ethereum 2.0 is Charles Hoskinson, the CEO of Input Output Global (IOG), the company behind the development and research of Cardano.

Hoskinson, who was also a co-founder of Ethereum, noted in a recent Fireside interview that the upgraded version of Ethereum will launch no earlier than 2023.

This is in contrast to reports that circulated online a few weeks ago when many speculated that Ethereum 2.0 would go live by August this year.

According to Hoskinson, Ethereum 2.0 will possibly launch in 2023, adding that the date could be pushed to 2024 depending on the progress made by developers.

The Cardano exec continued that Ethereum 1.5 has already gone live, which he referred to as Polkadot, a Layer-2 scaling solution on the Ethereum network. 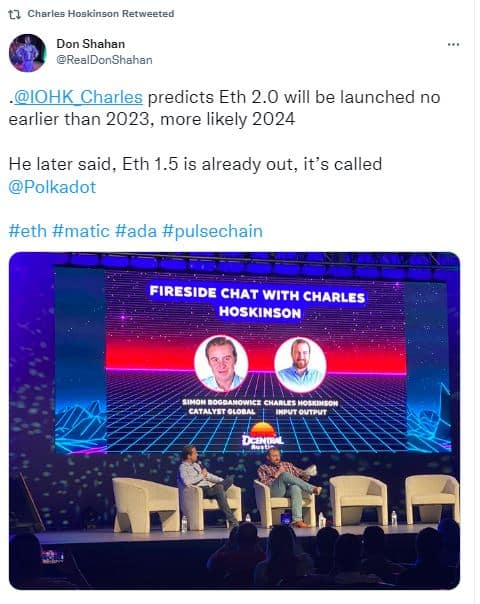 It is worth noting that Ethereum 2.0 is an ongoing upgrade expected to transition the popular blockchain network from a Proof-of-Work (PoW) algorithm to a Proof-of-Stake (PoS) consensus.

In a bid to make this possible, the upcoming Ethereum 2.0 has been broken down into three elements, the Beacon chain, the Merge, as well as the shard chains.

All chains are being worked on in parallel and their completion will determine when Ethereum 2.0 will be officially launched.

The development of Ethereum 2.0 comes following widespread complaints about the large energy consumption of the existing PoW mechanism, resulting in increased gas fees.

According to the Ethereum team, once ETH 2.0 launches, the network would become more scalable, sustainable, and secure, thus prompting enthusiasts of the project to be eager for the launch.

While the Beacon chain launched last year, enthusiasts of the project are expecting the second phase of the upgrade – the merge to go live in earnest.

At the moment, the development team is working round the clock to ensure the Merge phase launches without any issue and has been working towards achieving that goal in recent times.

The first rehearsal for the Merge was completed recently on the Ropsten test network.  The test network successfully executed the merge between the existing PoW chain and the Beacon PoS chains – a move similar to the process that the ETH 2.0 will undergo on the main chain in the coming months.

One of the last testnets until we merge on the #Ethereum mainnet🐼https://t.co/3lvlUfcAT4 pic.twitter.com/knd1IBlD8A

Meanwhile, despite Hoskinson commenting on one of his projects, the IOG CEO is still focused on the development of his flagship crypto project, Cardano.

The Cardano team is working relentlessly to ensure that the Vasil Hard Fork is launched without any issues later this month. As disclosed by Hoskinson, the Vasil Hard Fork Event has reached its final stages and will be implemented at the appropriate time come June 29.