The market capitalization of the fourth largest crypto in the world is almost $75 billion that makes Ripple (XRP) account for 3.2% of the total cryptocurrency market cap.

Over the past 7 days, XRP has jumped more than 40% becoming the world’s 4th most valuable digital currency. XRP is currently trading above $1.6 with a market capitalization of over $74.24 billion.

According to Coinmarketcap, XRP’s market cap has grown significantly over the past few weeks. XRP now accounts for almost 3.2% of the total market capitalization of digital currencies.

XRP’s overall market dominance has been growing since the beginning of April. The latest surge in Ethereum, BNB, and XRP is causing a sharp decline in Bitcoin’s market dominance.

According to Coinshares report, XRP had a significant jump in weekly institutional inflows in April, as the digital asset raised an estimated $33 million in the second week of April. 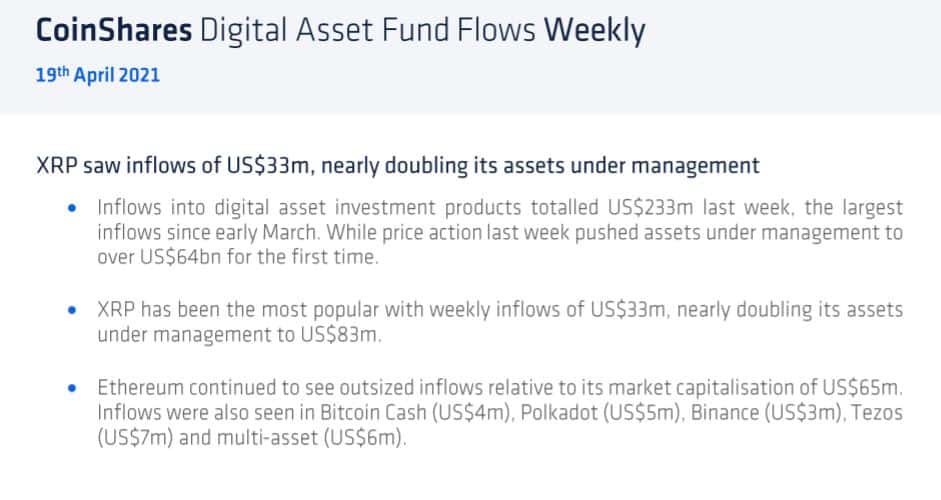 The total difference between the market capitalization of XRP and Binance Coin (BNB) is around $20 billion.

Overall, the market capitalization of digital currencies reached $2.25 trillion on Monday, the highest ever.

Bitcoin (BTC), currently has a market cap of more than $1.10 trillion.

- Advertisement -
Facebook
Twitter
Pinterest
WhatsApp
Linkedin
ReddIt
Email
Print
Tumblr
Telegram
Mix
VK
Digg
LINE
Viber
Naver
Previous articleIf You Had Bought $10, $100 or $1000 Worth of Ethereum 5 Years Ago, Here Is How Much You Would Have Made Today
Next articleTop 6 Altcoin To Follow This Week

CryptoQuant, an analyst firm, tweeted that the Bitcoin is not in a bear market. This is contrary to what many people are thinking right...
Read more
Analysis