The Kraken Ring – Controversial Options Put NFTs Back In The Spotlight 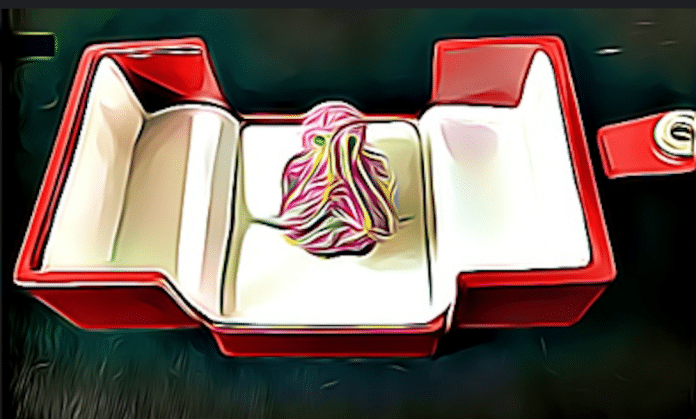 Vancouver, BC (August 17, 2021) Volume and demand for non-fungible tokens (NFTs) have been surging for a variety of reasons, especially when selected NFT pieces are selling for millions of dollars. However, the debate about their utility never seems to end and they are in the news quite often.

Although attempts have been made without success in bridging jewelry designers with NFTs, Au Palais Du Bijoux France Collection by Icon Art Gallery believe they have the winning ticket.

Never has an iconic symbol of one of the top cryptocurrency exchange logos has ever come in a multi-jewelled faceted ring until now.  The Kraken, a mythical sea monster with octopus/cephalopod-like appearance in Scandinavian folklore is the imaged used for US based Kraken exchange and now comes as a bedazzled ring.

The sterling silver cast and hand finished ring consisting of a polished split shank which extends to a haute relief carving in the image of a Kraken on top. The Kraken is pavé set with over 248 faceted round  rare light rubies (pink corundum). The eyes of the Kraken are set with two (2) Tsavorite green garnets. The ring is large and rather heavy weighing in at 14.4 grams. The price tag is only 10 ETH ($33,000) which isn’t eye catching compared to the multi-million dollar sales some NFTs are garnering but it’s still sizeable.

The NFT version of the Kraken ring has now been put up for sale and some question the options given to buyers.

“This isn’t a unique idea,” says owner Canadian author Robert Joseph Greene.  “World Famous artist  Damien Hirst made this proposal to his patrons when he offered NFT art for sale.”

However, with the option to destroy the physical original piece, environmentalists are crying fowl.

“The lowest carbon footprint is reuse before recycle; and this would be the best option,” says Paul Rankin, President of the Reusable Industrial Packaging Association.  “I would encourage anyone including artists to break down pieces to be reused for other projects instead of discarding them.”

The Kraken Ring is available on OpenSea.io. OpenSea is an NFT Exchange site or peer-to-peer marketplace for crypto collectibles, rare digital items, and NFTs.

San Francisco, California, 15th September, 2021, TRON, one of the world's largest and most popular blockchain-based operating systems, and BitTorrent, the leader in peer-to-peer...
Read more
Market

NAKJI NETWORK Completes a $8.8 Million Private Round Of Fundraising