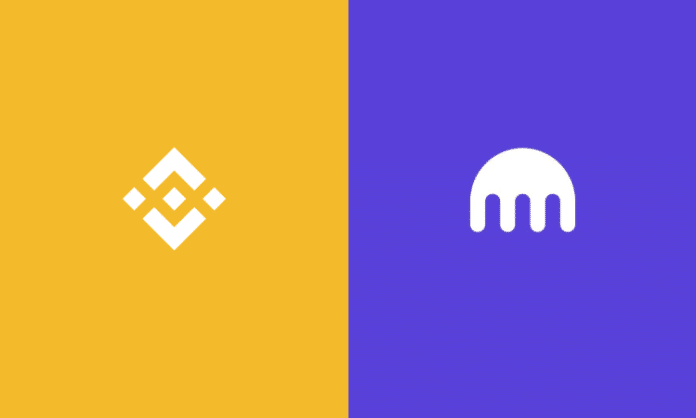 Deciding on the right cryptocurrency exchange trading platform for you can be a difficult process. Because crypto has become such a widespread and globally used phenomenon, many different platforms have popped up in the last few years.

There are some which are reputable and worth using, but there are also many which are pretty much useless. And the unfortunate thing is that there are still minimal resources out there that are providing helpful information in regards to which ones are which.

Binance and Kraken are two platforms that each boast millions of users and have a lot of upsides in regards to their functionality for traders. If you are still mulling over which platform to use, these two should be close to the top of your list.

They each have their own advantages and disadvantages and there are numerous differences in terms of what each platform offers. Let’s look a little deeper into the two platforms and the pros and cons you can expect when dealing with each one.

Binance was founded in 2017 by a developer who had been involved in creating high-frequency trading before the rise of crypto. In terms of daily trading volume, Binance is currently the largest exchange in the world.

Despite being such a massive platform, one thing that you will notice about Binance if you use their services is the fees that you can expect for trading. Using the maker-taker fee structure, typically their fees range from 0% to 0.1%.

This really is quite low for a service that is as popular and widely used as Binance and it’s a huge advantage especially if you are relatively new to trading. Do keep in mind though, that any platform like this is going to have a steep learning curve for beginners and Binance is no exception.

Another huge advantage present is the sheer amount of currencies that are available. Compared to Kraken which as we will discuss below, has 69 different coins, Binance has more than 500 for you to trade with.

There are very few platforms that have as substantial a variety as that. It is important to also note that while this wide range of currencies does give Binance a global presence, ther services for the U.S are quite limited.

Of those 500+ currencies, U.S residents only have access to 47. There is also a different Binance website for Americans which has quite a few less features than the international equivalents.

Margin trading is not available for the U.S, there’s no rewards center for earning crypto and the Binance Academy, which is a useful resource for people new to crypto-trading, is unavailable in the American market.

This is unlikely to change any time soon either because Binance still hasn’t acquired the U.S Money Service Businesses license. They just don’t prioritize America and don’t really need to due to their worldwide presence.

In addition, it’s worth considering that Binance had a substantial security breach in 2019 and while every measure has been taken to ensure that doesn’t happen again, they are not quite as transparent with their security measures as one might like.

Kraken was founded all the way back in 2011 when cryptocurrency was really just getting started and has been operating out of the U.S ever since. Though it obviously doesn’t boast as many users as Binance, Kraken is still one of the top platforms out there for traders.

The main reason why they initially became so successful was because they were selected to provide bitcoin trading data to the Bloomberg Terminal. This is the leading data provider, meaning that a lot of early crypto traders would have been familiar with it and been led to Kraken as a result.

The big advantage that this platform has over Binance is the fact that it is much more widely available to American users. Being a U.S-based company, it is available to all American residents apart from those in New York and Washington.

In this regard, it is a much more enticing platform for Americans but may not have as much international appeal, because it offers trading with a substantially lower number of currencies than Binance.

There are 69 in total, seven of which are fiat currencies. The trading fees are higher than they are for Binance, but still not as high as some of the lesser-known platforms are. They can get as high as 0.26%.

And similar to Binance, it won’t be that easy for new users to get accustomed to but it does offer a very quick and easy verification process, a variety of well-designed and up to date mobile apps and their security is second to none.

Security is something that Kraken takes very seriously and they are constantly looking for ways to improve it and also looking out for new pieces of technology that can enhance security too.

Both platforms boast a number of advantages, but considering it from every angle I would say that Binance is probably the superior choice overall. The greater number of currencies, the lower fees and the discounts are a huge incentive.

If you are trading in the U.S, you might be better served by Kraken because of the restrictions that Binance has. You will get a lot out of either one, it just comes down to certain personal factors such as your location, your budget and how much experience you have as a trader.

We are delighted to announce the listing of FIO Protocol (FIO) on BitForex, And BitForex will integrate FIO send feature. The details are listed...
Read more
Exchanges

Find out what you can expect from the crypto exchange

If you're new to cryptocurrency trading, finding a platform where you can buy and sell commodities like bitcoin, Ethereum, or Litecoin might be a...
Read more
Exchanges

LetsExchange Review: Non-Custodial Exchange Focused on Privacy, Security, and Ease of Use

LetsExchange is an instant cryptocurrency exchange service launched in early 2021. So, yes, it is a new addition to the wide array of cryptocurrency...
Read more