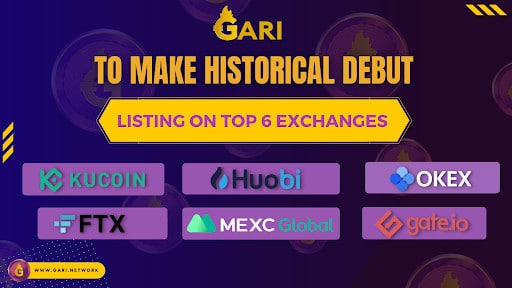 Mumbai, India, 17th January 2022,  Chingari, the leading video sharing app in India, has achieved another first with the historic parallel listing of its native $GARI token on six of the world’s leading centralized cryptocurrencies exchanges.

$GARI is the native cryptocurrency token of Chingari, a short-video sharing platform that now ranks as the number one social media application in India on the Google Play store. The $GARI token was launched in October 2021 amid great fanfare by the company’s Bollywood superstar brand ambassador Salman Khan, and followed up with a record-breaking IDO via its Initial DEX offering on the SolRazr launchpad last month.

The $GARI token is built on Solana, an Indian-developed alternative to the Ethereum blockchain that offers the advantage of much faster transaction speeds and lower associated costs. $GARI is a social token that will empower creators on the Chingari platform to set up their own ecommerce spaces, where they can sell physical merchandise, create non-fungible tokens (NFTs) and enable fans to fund their favorite artists.

The aim is to drive a digital economy, in which users will also be able to obtain $GARI tokens for creating or watching content on the platform.

Chingari is the most popular social media app to experiment with cryptocurrency so far. The app has been downloaded more than 100 million times and counts over 32 million active monthly users, meaning $GARI has the key advantage of being able to tap into Chingari’s enormous existing audience. To date, few other cryptocurrency tokens have had such a large potential user base at launch.

$GARI’s listing on some of the world’s leading centralized crypto exchanges will generate yet more buzz around Chingari’s innovative project. Huobi Global, FTX, KuCoin and Gate are all ranked among the world’s top ten exchanges in terms of volume traded, traffic and liquidity, while OKEx ranked in the top 20 and MEXC Global sits in 26th place.

“Chingari is bringing the web3 revolution to the creator economy with its $GARI token,” Chingari CEO Sumit Ghosh said in a statement. “$GARI will enable 30 million monthly active users of the Chingari Short video app to get on-chain. For the first time in the history of blockchain, an app will onboard millions of users on-chain from the day of its launch. The Chingari and $GARI teams and the entire community are super excited about its launch and listing!”

Chingari is a short video-sharing app built to cater to Indian audiences that allow users to create and share videos with incredible filters and games, shop for merchandise, send messages, and more. With more than 85 million downloads and 32 million active users, Chingari is one of India’s fastest-growing social media platforms and the most popular app of its kind. Contacts, Sumit Ghosh Chingari, [email protected]