New Record: 1 Billion Shiba Inu Burnt in a Single Transaction, 1.15B SHIB Burned Within 24 Hours, Over 2B In 48 Hours

ShibaBurn token’s burn party was scheduled for 22nd March 2022 and hosted live by Matthew G Perry on his official Youtube Channel named “Let It Burn.” As promised, during the party, the ShibaBurn token burned 1 Billion Shiba Inu (SHIB) tokens in a single transaction. This marks the first-ever Shiba Burn Party for the Let It Burn YouTube channel and is now registered as the LARGEST community-led SHIB burn in the record books. 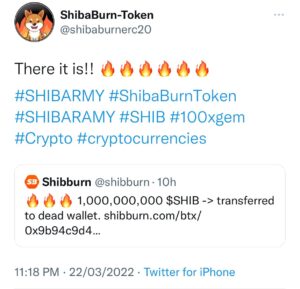 Thank you for all the retweets!

Here is the transaction hash for this #SHIB burn. https://t.co/rWxHwTfCxP

In this way, both Matthew G Perry and ShibaBurn burnt 1.1 billion Shiba Inu tokens in one day.

In the past 24 hours, there have been a total of 1,157,908,364 $SHIB tokens burned and 33 transactions. Visit https://t.co/t0eRMnyZel to view the overall total of #SHIB tokens burned, circulating supply, and more. #shibarmy

The newly emerging tokens played a significant role as during the last 48 hours, the community-led initiatives destroyed 2,179,200,944 (2.17B) Shiba Inu tokens.

Readers should note that ‘ShibaBurn-Token’ has no official relation with Shiba Inu (SHIB) token. Investors should have done their research before investing in such projects.

Yesterday NOWPayments presented the optional burn for merchants — a feature that helps businesses burn SHIB & LEASH profit by selecting which part of their profit they would like to burn.

Optional burn feature by NOWPayments allows Businesses to count the amount of their SHIB & LEASH profit right in NOWPayments’ account. Businesses that accept Shib and leash as payments can easily select the percentage mark-up for the burning to contribute to NowPayments New Shib Burn Feature.