Best NFT Token to Buy in April- GAMEIN by GameInfinity 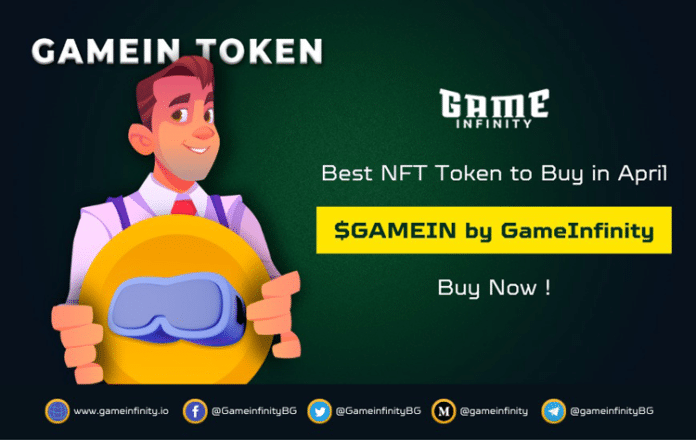 AS per the theory, the NFT games utilize blockchain technology for following purposes:

The combination and integration of blockchain technology and Non-Fungible Tokens has presented a pathway for game developers and players alike to leverage these exciting tools while building digital worlds. Due to this evolution, 2022 looks all ready to be a breakout year specifically for NFT gaming, with multiple fascinating projects releasing one after the other.

In this article, we will cover why it is recommended to buy GAMEIN token from Gameinfinity NFT gaming metaverse this April that will allow you to make money. The games on the platform are quite fun and anyone can freely trade their assets/items, in-game tokens with other players as well.

Many of the functionalities are fun and offer free play to earn NFT games that can earn you rewards. Not only entertainment but also these NFT games can help you make tons of money. Check out the Web3 NFT gaming platform that has been highlighting to generate much hype and touched on the value potential for the years ahead.

Detailed below is the complete review written in brief about the best new NFT project that shook up the status quo within the gaming industry:

Gameinfinity is considered as one of the best play-to-earn cryptocurrency games built on the Binance Smart Chain network that is offering players the chance to grab benefit from an intriguing link between the metaverse and the real-world entities. The Gameinfinity metaverse presents a first-of-its-kind connection to the thrilling world of gaming with various compelling P2E game play elements.

As mentioned in the Gameinfinity whitepaper, this project provides the basis for players to easily monetize their in-game exploits. Additionally, the innovative game play and advanced featured experience will likely attract a large audience of potential gamers in no time.

Mentioning the Proof-of-Stake (PoS) mechanism is eventually used to validate ecosystem data and jot the entire scope to generate rewards via mining. The mining proceed will add another engaging way to create income for community members within the Gameinfinity metaverse.

Since last year, this NFT project has been generating buzz in the media portraying one of the best-known examples of a Web3 metaverse applications. Since presale event and bounty program announcement its popularity has skyrocketed and witnessed the large part where the developers have integrated NFTs into the game.

Within the gaming ecosystem, the in-game items are structured as NFTs that allows the players to create a self-sustaining marketplace supported and powered by $GAMEIN tokens- Gameinfinity’s transactional token. In the end, due to the interactive nature of this gaming digital world, it is now easy for players to create relationships with other exiting players to link up on social media platforms.

GAMEIN asset is a fresh new Web3 NFT token developed and deployed for Gameinfinity gaming platform. This token is built as a BSC token offering a total supply of 270 million, where 75% is raised to be circulated with limited distribution. It is a BSC-based BEP20 token which is designed as the operational currency for all Web3 Games, in-Game NFT’s for the Gameinfinity metaverse.

The private sale of GameInfinity’s GAMEIN token was announced with 4% of the total supply to be issued to the users commencing from 04 February 2022. If you are eager to earn money and exclusive rewards here is the process to enter the private sale. Prior to purchasing the GAMEIN token, the user needs to whitelist their address.

Step 4: Check out the private sale form and enter the details like the BNB you want to buy.

First big update is GameInfinity Web3 Game Hextris is now available as the third game to trade and play on. You can instantly give it a try. Hextris is an online game which is a twist for the classic Tetris game remembered from childhood. This game was created by 4 Boston teens namely- Garrett Finucane, Michael Yang, Noah Moroze, and Logan Engstrom formed Team Snowman. They all entered and successfully won HackExeter 2014.

Hextris is on now like on Web3 and Gameinfinity team is overwhelmed to bring this childhood game and Stressbuster game available to play for the millennial. Just you need to connect your BSC wallet and start with the play of Hextris game right away using your GAMEIN token balance wherein you need only 10 GAMEIN for each game. Not only this, the highest scorer of the day will also be the winner to grab all major tokens in-game pool.

The next blowing update is the announcement of the Airdrop of $GAMEIN token phase 2. Releasing the recent update on the official roadmap and whitepaper alike has derived to distribute 49% of the token supply for rewards, games, in-game events and NFT reserve.

Gameinfinity team openly welcomes new members to the community to wind up more value to the games that have been released with the new update on the giveaway. In this announcement, one major thing was displayed about 1000 $GAMEIN tokens for each which is a blast.

Till date Gameinfinity metaverse is successfully in operating its test net version of various Web3 games, since start, the team has already achieved 3 games that is currently live and very soon by the end of April we are preparing to add up 2 more games.

Notable to mention about the $GAMEIN tokens presale phase 1 to be live and is currently ongoing. Time is running and it will soon close by the end of April. We have plans to list this asset on PancakeSwap after the presale. We invite our entire crypto community to explore this new Gameinfinity Web3 gaming platform and help us with influencing feedback and reviews.