Terra Luna Meltdown: Lessons For The Future Of Stablecoins 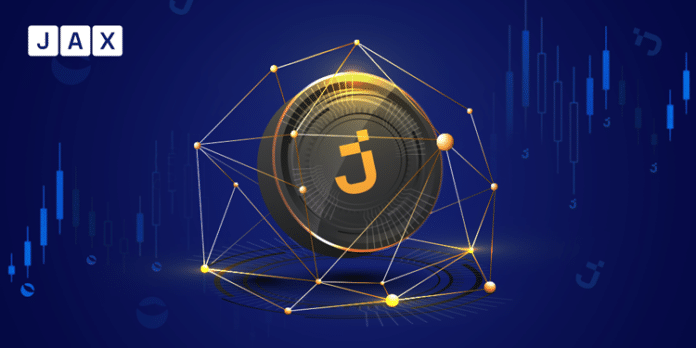 The past two weeks have been a rollercoaster for crypto enthusiasts. One of the most praised projects, Terra Luna (Luna hereafter), a platform that issues an algorithmic stablecoin, Terra USD (UST hereafter), is in trouble. The pair UST/USD started de-pegging on May 8th, 1UST was worth less than 1USD. The culprit? According to Luna defenders, a big trader dumped $286 million of UST on Curve finance. Whether the ‘attack’ was orchestrated or not is rather moot nonetheless. Indeed, the UST peg to USD is under immense stress. Should the market and demand shocks be predictable to keep troubles at bay to maintain the UST parity to the dollar is a clear indicator of Luna’s design flaws. The PoS-based algorithmic stablecoin was not as sustainable as the team claims. What are the lessons for the future of stablecoins that we can draw from this market meltdown?

This is not the first time in history that a bank run occurs, and it will not be the last. However, failure seems like an inherent feature of algorithmic stablecoins, as the list of unsustainable projects is growing faster than ever: AMPL, UST, followed by DEI, just to name a few.

In the realm of digital currencies, there are 3 main ways to peg a token value to the dollar: i) with cash or liquid assets reserves in a bank account. For each $ value that is issued in a token, a corresponding dollar sits (or other liquid assets) in a bank account to ensure a 1:1 exchange rate at all times, ii) with volatile collateral such as BTC or ETH. In that case, you need, for instance, $1,5 in collateral in order to issue $1 of stablecoin. However, this method is capital consuming for issuers and not very efficient, iii) with a fully decentralized stablecoin where its monetary policy is automated by a smart contract. The third road was the one taken by Luna.

Printing and burning UST goes hand in hand with the demand for Luna. The peg is maintained through arbitrage. If the price of 1UST>1USD, traders have an incentive to destroy $1 equivalent of Luna to create $1 of UST and sell it back to the market, pocketing the difference. Conversely, if 1UST<1USD, arbitrage traders need to remove UST out of circulation by printing some Luna to restore the pair. As long as the price of the underlying asset price goes up, more UST can be printed. Indeed, a Luna price at $100, allows you to print 100 or destroy 100 UST.

Between November 2021 and May 2022, approximately $16bn worth of UST have hit the market, or 90 million UST every day have been issued. The Anchor protocol, a lending and borrowing platform running on Terra’s blockchain, was offering interest rates up to 20% by staking your UST through Anchor. This drove up the demand for UST and the destruction of Lunas along the way. Less Lunas in circulation translate into price increase.

This mechanism is therefore correlated to a relatively high market cap for Luna. However, if a huge amount of UST is sold into the market, the pair UST/USD is not maintained, forcing arbitrageurs to issue more Luna and restore the peg. Luna’s newly created supply put downward pressure on its market price. Thus, if more UST need to be removed from circulation during an economic shock, the price of Luna will continue to decrease.

At the time of writing, there are 11.28bn of UST in circulation, for a market price of $0.09. Thus, 11.28*($1-$0.09)=$10.26bn extra supply! In other words, 91% of UST should be removed from the market to restore the pair. By doing that, the protocol should create another 73 trillion Lunas at the current price of $0.00014 to repeg UST, hence decreasing the price of Luna further and triggering a death spiral. Luna becomes a worthless asset on a balance sheet, which cannot maintain the peg. Terra Luna went bankrupt.

When UST stakers on Anchor saw their money losing its value, they started to panic sell their UST to the market to save what still could be saved. Over the span of 10 days, 13bn UST have been removed from Anchor, reinforcing the downward pressure on UST.

Playing against the market

As of today, the extra supply of UST has not been removed, avoiding inflating the Luna token even more, where its supply already stands at 6.5 trillion. Luna’s core team and the market have been playing cats and mice. Between May 8th and May 11th, while Luna’s co-founder, Do Kwon, was trying to both reassure his community and restore the pair by selling out Luna’s reserves pool of BTC, the market was playing against the team. Indeed, this move signals to the market that Luna is too big to fail and the team will come to the rescue no matter what.

Unless Do Kwon is playing rug pull, then it’s a safe bet to buy UST at a low price, and sell them back for BTC even before the pair is fully restored to pocket the difference. In this scenario, Luna is losing their BTC while trying to restore a pair against arbitrage traders. The trader can even cover his or her long position on UST by shorting Luna. Either way, he/she will pocket the money by betting against the possibility of a peg. Luna’s team is now alone playing against arbitrage traders in a market where bears were taking over bulls. This is just a recipe for catastrophe for UST users. Luna’s billions of BTC won’t be enough to restore the pair, let alone users’ confidence.

In fact, the UST/USD pair has never been restored, as the graph below is showing: 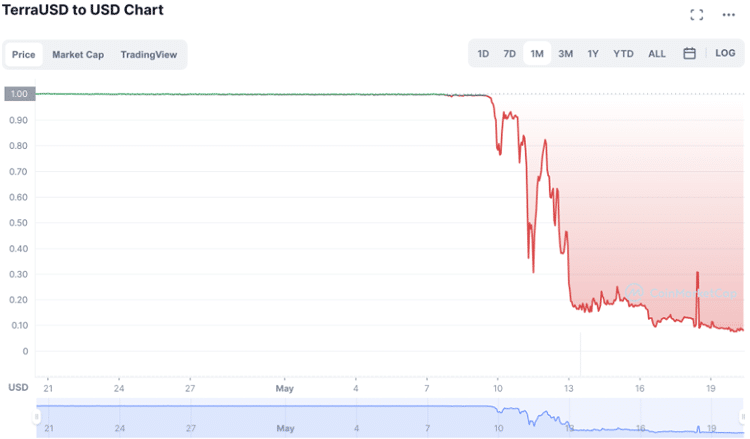 Both economists Benjamin Klein (1974)[1] and Milton Friedman (1959)[2] researched the era of private monies in the US in the 19th century. Klein’s research was very insightful, as he argued that competitive private monies in circulation would lead to the payment of interests to holders. This is exactly what happened in the case of UST. Indeed, Anchor was paying a 20% yearly interest to UST stakers, and Luna was conveying a convenience yield to its holders. Well, as long as everything was working fine.

Friedman argues that the supply of competitive money leads ultimately to a peg to its paper value, due to infinite inflationary pressures. The case actually happened in Somalia in the 1990’s during the civil war, and was detailed by Mubarak (2003)[3]. This is due to the lack of confidence inherent to private monies, since banks’ balance sheets were hard to audit until the National Banking Act was passed in 1864, which regulated private banks. Before this piece of regulation, banknotes in circulation were far greater than bank reserves, putting the whole system at risk.

We, at Jax.Network, did not wait for the regulators to fix those issues that are shaking the algorithmic stablecoin economy. We made it very costly to print JAX, hence, preventing inflation and printing sprees like Luna. Our asset coin mining is completely decorrelated to our transaction coin, preventing market manipulations. Furthermore, our balance sheet is our blockchain, and is thus fully auditable in real time. Users know exactly how many transaction coins are circulating. Also, they are not used for staking, only for transaction purposes. The convenience yield is provided by the success of our transaction coin, which is reflected by the price movements of the asset coin, but production of both coins follows completely different rules and is in no way interlinked. Check our project in more detail here.