HomeCrypto NewsMarketTronDao To Withdraw 2.5B TRX From Binance, Will Justin Sun Be Able...

TronDao To Withdraw 2.5B TRX From Binance, Will Justin Sun Be Able To Save Tron & Protect USDD From De-Pegging

TronDAO Deploys More Collateral As USDD Stablecoin Is Increasingly Pressured To De-Peg and Tron (TRX) is feeling the heat of stable coin depegging.

TRON and TronDao are trying hard to maintain the USDD peg by throwing lots of money at it, but is it working?

Tron’s stablecoin, USDD, has come under pressure to de-peg from the USD of late. Meanwhile, Justin Sun and his company, TRON, have moved to transfer billions of dollars in collateral and inject it into the market to maintain the USD peg. This started when the stable coin lost its peg as the markets pulled back.

As recently, another stablecon, UST, that runs on the Terra network, collapsed. One major reason that led to the collapse of UST was the negligible collateral amount compared to the coin’s market.

However, in the case of Tron’s USDD, the stablecoin is more collateralized than UST. That gives it a larger room for recovery but as the divergence continues in order to defend it, that collateral will have to be deployed. According to an update by TronDAO, USDD collateralization totals over 300%. 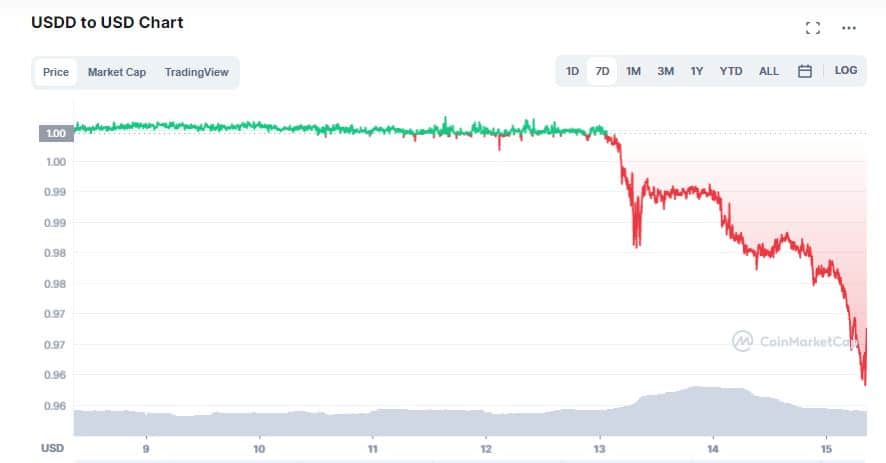 Besides USDD, Tron’s other coin, TRX, has equally been affected by the current market conditions. The TRX market has been in trouble just like the rest of the crypto market. According to available data, TRX has been struggling to fend off a severe bearish attack. A close of below $0.057 would be bad for the coin as it would give way for a further slump to $0.016. At this moment, TRX is trading at around $0.049.

It doesn’t seem like Justin has the power to prevent #TRON from collapsing.

Be aware that a decisive daily close below $0.057 puts $TRX at risk of crashing to $0.016. https://t.co/0zNNEIX5ok pic.twitter.com/CAQdOkgLZC

As was the case for Terra’s UST, Tron needs to deploy more collateral to save USDD from a potential de-peg and price crash. The company is already doing that.

Initially, TronDAO had set aside $2 billion for the injection, but that amount has now increased.

A recent update by Justin Sun informs that a further $650 million has been injected, bringing the total collateral to $2.5 billion – at the time.

Now, another $500 million has been deployed to maintain the USDD peg. The funds were deployed in form of USDS. It seems that TRON is prepared to do everything it can to prevent the collapse of its vast ecosystem.

Moves To Save Tron

to further protect Tron, the foundation will withdraw 2.5B coins from Binance.

To safeguard the overall blockchain industry and crypto market, TRON DAO Reserve will withdraw 2.5 billion #TRX out of binance.

Now we should wait and see whether Tron founder be able to save his reputation and his currencies (TRX and USDD) from becoming LUNA and UST, only time can tell.

Users Warned About Tron And USDD

The threat of a potential collapse of the TRON ecosystem has put some exchanges on high alert, leading them to inform their user base of the prevailing uncertain conditions.

One South Korean exchange, UpBit, has already warned its users about the apparent fluctuation of USDD value after the recent brief de-peg.

In the case of South Korean-based exchanges, it’s understandable that they would try to take some action to avoid getting into trouble in the event of a market collapse.

It appears that the collapse of Terra, and the subsequent legal issues facing the developer company, TFL, and founder Do Kwon, may have sent a warning to crypto entities to be vigilant during such events. Do Kwon and TFL are based in South Korea. South Korean authorities are also taking steps to regulate the crypto industry more stringently.