FTX collapse has an unexpected effect on Ethereum.

A surge in on-chain transactions has led to the burning of 13,000 ETH in just three days, according to data from Etherscan.

It comes as users rushed to take their assets off exchanges as rumors of FTX’s insolvency took hold. Former FTX CEO Sam Bankman-Fried, in a message to staff, indicated that the now-bankrupt crypto exchange processed over $6 billion in client withdrawals in just three days, according to a Reuters report. It is a severe jump from an average of about tens of millions daily.

The UST and Celsius PTSD is strong with the market.

The ultrasound.money ETH supply chart shows that the token’s supply took a nosedive on Monday just after Binance’s Changpeng Zhao declared that the exchange was liquidating its FTT position triggering the FTX bank run. As a result, the annual issuance now sits at -0.032% after a steep drop in the last couple of days. Furthermore, data shows that Ethereum’s supply has dropped by 6,158 ETH post Merge. 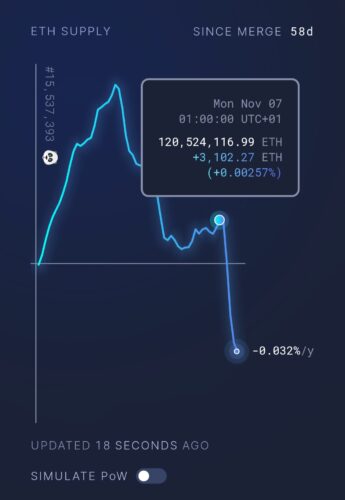 It is worth noting that Ethereum has held up better than Bitcoin in the wake of the FTX collapse. Compared to Ethereum, which did not even put in a new yearly low, Bitcoin tapped two-year price lows at $15,682.

As highlighted above, FTX and about 130 other subsidiaries and sister companies this week filed for chapter 11 bankruptcy after a bank run confirmed suspicions of shady financials. Notably, the once-second-largest crypto exchange in the world loaned a considerable amount of user funds to its sister company Alameda Research collateralized by its exchange token FTT, which is highly illiquid.

On Monday, SBF still gave users assurances that the exchange was fine. But, notably, things have taken a turn for the worse as it appears someone has hacked the crypto exchange and withdrawn over $300 million worth of assets. This further reduces the chances of users getting fair compensation for their holdings through bankruptcy proceedings.