Shiba Eternity developers have rolled out version 1.1.4, per a tweet from Mazrael (@Materocks), a member of the Shiba Inu games team yesterday.

Notably, it is the second update the game has received since its launch and potentially the largest one yet. 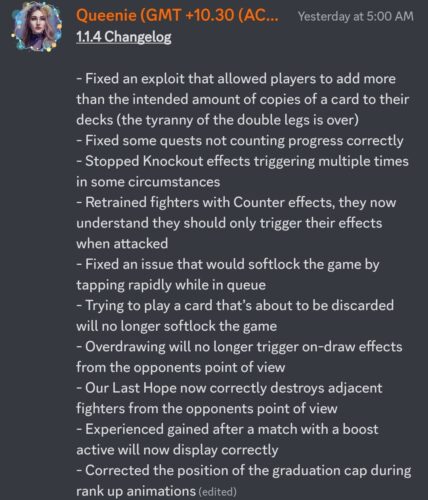 The game received its first upgrade toward the end of November. Per patch notes provided by Queenie, it offered only 2 “hotfixes” despite claims from Shytoshi Kusama that the upgrade would fix over 100 bugs. Notably, the upgrade fixed a bug that caused players to lose rank and fixed issues causing the information button on the discipline selection screen that caused it to display wrong information.

The highly anticipated Shiba Inu mobile card collection game went live in October, as reported by The Crypto Basic. So far, it has received over 250,000 downloads combining the data from Android and Apple app stores, with a 4.8-star rating on both platforms at press time.

In a tweet yesterday, veteran game developer William Volk, who served as a consultant on the project, said it was one of his best projects.

“I am proud of this amazing team,” Volk tweeted. “This [Shiba Eternity] is the highest-rated card game and one of the best things I have worked on in my entire career.”

Notably, the focus now is on advertising the game, the blockchain version, and Shibarium, as Shiba Inu lead developer Shytoshi Kusama revealed in the blog post accompanying the 1150-page-long guide in early November.