Yesterday, Bitcoin seemed to hit almost its all-time high, but it went downhill. The cryptocurrency fell by more than 14 percent and found a low at $ 16400. What is going on?

Whales Dump Bitcoin on Exchanges
The price decline came after major Bitcoin investors (whales) sent their coins to cryptocurrency exchanges. This is evident from an indicator from the analysis agency CryptoQuant. Ki-Young Ju is CEO of CryptoQuant:

“The average inflow of Bitcoins on exchanges rose a few hours ago. That means that whales sold their Bitcoins on the exchanges. “

“Long-term indicators show that buying pressure continues to hold. I still believe we can break $ 20,000 in the next few days. “

All Exchanges Inflow Mean increased a few hours ago.

It indicates that whales, relatively speaking, deposited $BTC to exchanges.

But long-term on-chain indicators say the buying pressure prevails. I still think we can break 20k in a few days.

Market Needs Cooling
Another explanation is that the market needs some cooling. From the beginning of October to the peak in November, the BTC price rose by more than 87 percent. The market became euphoric, the highest Bitcoin price ever came very close. 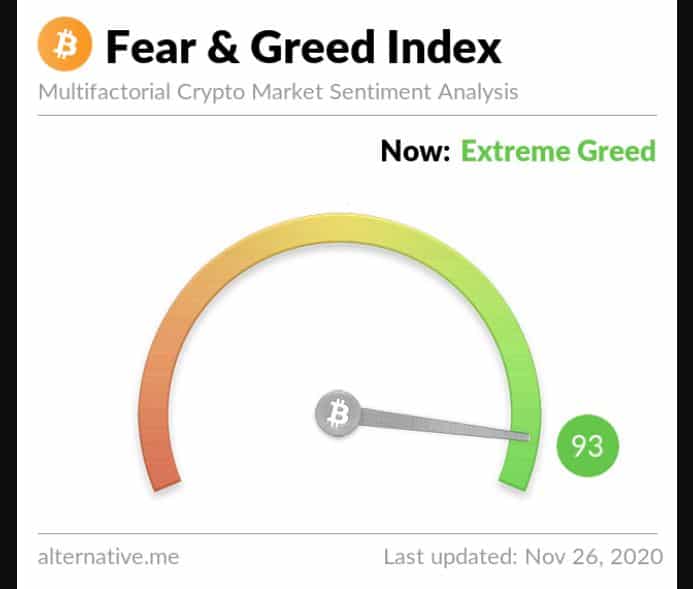 Alternative’s Fear & Greed Indicator is an index that shows the sentiment in the market. At the moment there is extreme greed. Such high values ​​of greed are rare. Before we start to see a new price increase, a correction is therefore important. That cools the sentiment a bit, giving Bitcoin the room to push through to the all-time high.

Bitcoin Out of Rising Trend
Can the price drop further? That is quite possible. Bitcoin has been in a parabolic upward trend since early September. Last night Bitcoin broke out of this trend. The support of USD 18,000 also turned out to be unsustainable, so we can expect even lower prices.