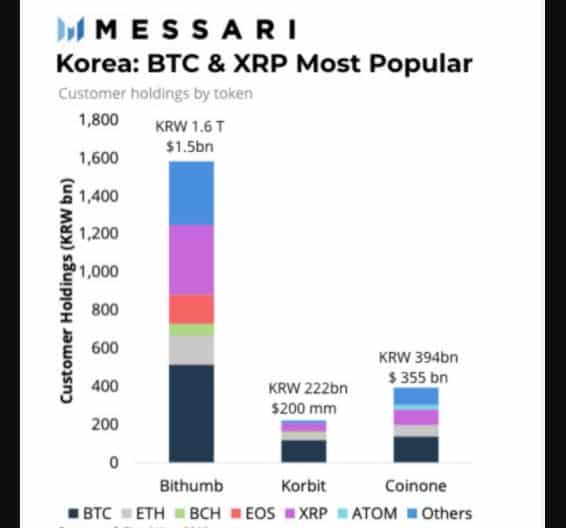 According to the cryptocurrency report published by Messari, investors in South Korea prefer to trade XRP instead of Ethereum.

XRP has the most trading volume in Korean after Bitcoin, where the DeFi market is less popular compared to Western countries.

Messari’s, Mira Christanto has prepared a report on the cryptocurrency market in Southeast Asia. The report, which examined China, South Korea, Japan and several different countries, found a significant volume difference between some cryptocurrencies.

It is believed that three out of every ten people working in South Korea invest in cryptocurrencies. This popularity led to the emergence of giants crypto exchanges such as Bithumb, Upbit, Korbit and Coinone.

Each of the four exchanges holds at least $10 million in digital assets. This drives them to make statements about the assets they own. Based on these statements, Christanto identified the most popular cryptocurrencies in Korea.

The most popular cryptocurrency among South Korean investors was Bitcoin, followed by XRP. This is because people are not turning to Ethereum and DeFi tokens.

Japan, which has hosted many hacking attacks, including MT Gox, has strict regulations on cryptocurrencies. There are 26 exchanges in the country that have managed to obtain licenses, but they cannot list USDT, one of the most popular cryptocurrencies in the world.

It is believed that individual investors in the country therefore turn to platform based projects like XRP.

The attitude of companies such as SBI Group in Japan towards XRP is positive. SBI, which partnered with Ripple in 2017, plans to create a new cryptocurrency fund, 50 percent of which will consist of XRP.

The SBI is known to support Ripple in the U.S SEC case. Christanto says companies in Japan “rely on and prefer centralized systems.”

XRP Strengthening in Malaysia and the Philippines

80 percent of the population of the Philippines has necessary facilities, but don’t have a bank account.

According to Messari’s study, between 80 percent and 85 percent of the country’s cryptocurrency volume is provided by financial companies dealing in cryptocurrencies. The most popular pair in the country after the BTC-PHP (Philippine Peso) is XRP-PHP.

In Malaysia, cryptrocurencies encounter tougher regulations. Malaysia’s regulator, SCM, does not recognize cryptocurrencies as legal means of payment, does not allow derivatives trading in the country, and only allows the listing of self-approved cryptocurrencies. SCM’s shows green light on Bitcoin, Ethereum and XRP.

Albert Brownhttps://thecryptobasic.com/
Albert Brown is a crypto journalist interested in technology and technical innovations. He has been in crypto since 2017. Believes that blockchain and cryptocurrencies have a potential to transform the world in the future in many of its aspects. ‘Hodls’ major cryptocurrencies and has written for multiple crypto media outlets. His articles have been quoted by such crypto influencers as Tyler Winklevoss, John McAfee, CZ Binance, Max Keiser, etc.