Cardano is up 12% after falling below the critical support at $1.461. The ADA is currently hovering within the critical resistance level from $1.535 to $1.644 range. Only a decisive close above $1.644 would confirm the start of the new bullish rally.

Cardano price bottomed on June 12 after a massive decline since June 3. The higher high, set on June 13, signaled a new uptrend.

This rally formed does not yet confirm that ADA will continue to rise, and the on-chain data shows Cardano will face stiff resistance as it rallies upwards. 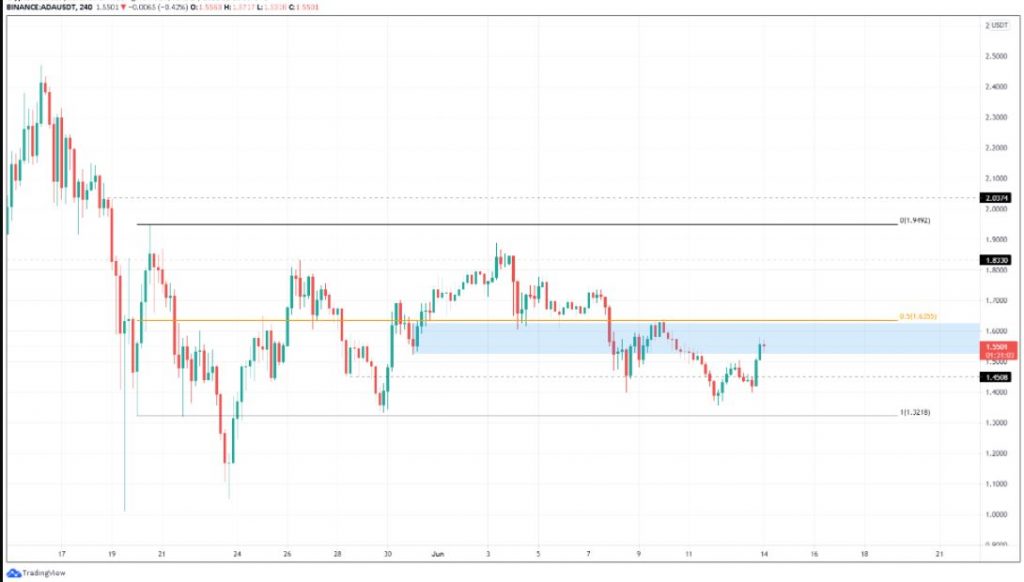 Currently, Cardano price is trading in the supply zone, which ranges from $1.535 to $1.644. This area will offer the most resistance to the bulls and may even stop the rally.

Failure to overcome this barrier will result in a decline that could push the ADA towards support at $1.461. If selling pressure continues to rise, the Ethereum killer could retest the swing low at $1.332.

IntoTheBlock In/Out of the Money Around Price (IOMAP) model support ADA decline, which reveals the resistance levels of underwater investors.

From $1.56 to $ 1.72, approximately 408,020 addresses purchased nearly 6.15 billion ADA tokens. These investors are “out of money” and might want to sell at breakeven if Cardano rises, so a short burst of bullish momentum will not be enough to break through this wall of underwater investors.

The other metric that go against ADA is that over the past month, the number of new addresses joining the Cardano network has dropped from $79,600 to $27,561. This 66% drop indicates that investors are not interested in the ADA at current price levels and are either reallocating their funds or earning profits by selling ADA.