Shiba Inu made it onto the list of the top 20 cryptocurrencies by market value as per data supplied by the coin tracking website Coinmarketcap.

At the time of writing, SHIB is the 15th most valuable crypto in the world. Because of the dramatic price rally, SHIB crossed Litecoin (LTC), Chainlink (LINK), Bitcoin cash (BCH), Polygon (Matic) to take number 15 on Coinmarketcap. 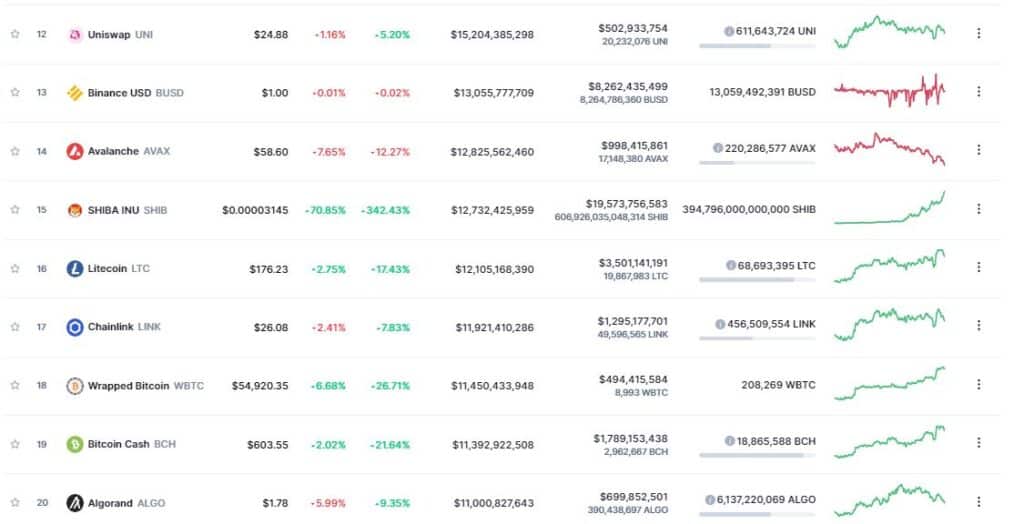 SHIB current worth is $12.7 billion, the price of the coin has risen almost 230% over the last three days and has outperformed the entire cryptocurrency market.

Shiba Inu recently surpasses Bitcoin by a significant amount in terms of trading volume on Coinbase the largest US exchange.

Notably, the hashtag #SHIB has been included in the top 10 tweets of Twitter numerous times in the last 24 hours, and the increasing number of searches is driving the price of the currency.

“Thank you, #ShibArmy, for helping us reach yet another milestone in our history. Today, we reached 1,000,000 Followers on Twitter.”

Thank you, #ShibArmy, for helping us reach yet another milestone in our history. Today, we reached 1,000,000 Followers on Twitter.

Now is when we mint and showcase our #1MFRIENDSHIBS.

Ethereum co-founder, Vitalik Buterin’s burning 90 percent of his SHIB tokens, Whales buying SHIB, Musk’s recent photograph of his Shiba Inu puppy as well as rumors about Shib Robinhood’s listing is believed to be the primary reasons behind such a strong rally.