Top Altcoin To Watch This Week 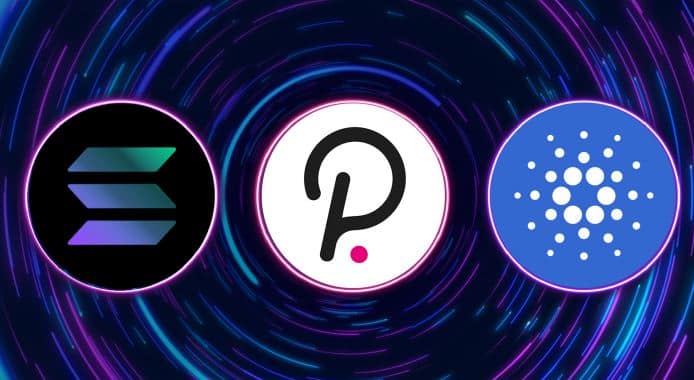 We are currently going through the biggest bullish cycle of crypto history in terms of time compared to previous cycles.

Let’s take a look at the most promising altcoins for this week. These altcoins are part of the third generation of cryptocurrencies, where Bitcoin belongs to the first generation and Ethereum is from the second generation.

Solana has a platform similar to Ethereum, which allows the developers to make Decentralized Applications (Dapps), NFTs, Games, and more on its platform.

Launched in March 2020, Solana uses Proof of History (PoH) as a consensus protocol, differentiating it from Proof of Stake (PoS) as ETH 2.0 or Proof of Work (PoW) which is used in Bitcoin.

Earlier this year, SOL was trading at approximately $3.5, reaching today $255 dollars, an increase of %7185 in less than a year.

One of the most assuring things about Solana is that a famous Star Atlas, an NFT virtual game metaverse will be built inside Solana, the game will be released in 2022, which may have an unimaginable influence on SOL’s price for the coming months.

Despite being very new in the market, SOL still has a lot to build and improve, but Solana has undoubtedly a magnificent future ahead. 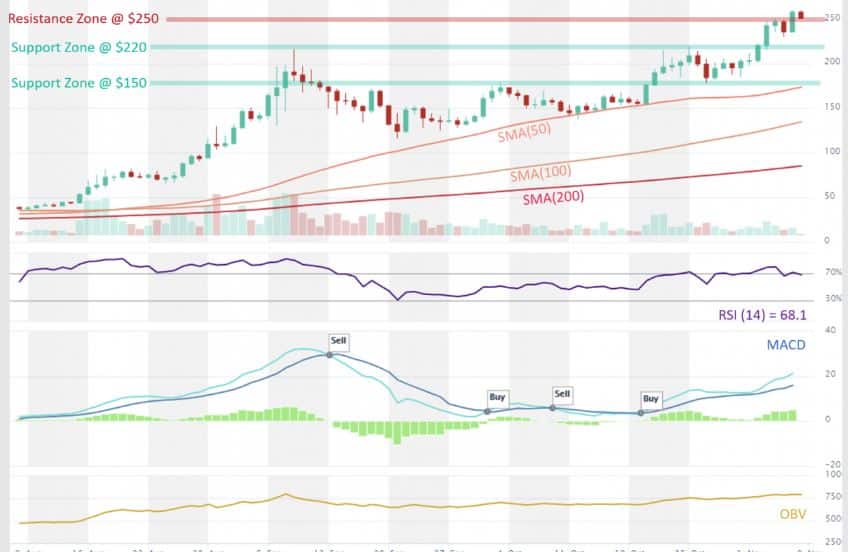 Trend: Uptrend across all time horizons (Short- Medium- and Long-Term).

Momentum is Bullish: ( MACD Line is above MACD Signal Line and RSI is above 55).

OBV (On-Balance Volume): is rising, indicating that volume on Up days is greater than the volume on Down days. Hence, demand (buyers) exceeds supply (sellers).

Polkadot has individual blockchains that are called parachains (parallel blockchains) and the main blockchain that is called Relay Chain, with the objective of exchanging information with exceptional ease and thus being able to develop more powerful services and applications.

Launched in 2020, the consensus system used in DOT is the NPoS (Nominated Proof of Stake), similar in many respects to the PoS (Proof of Stake), a mechanism used by cryptos such as Cardano.

Earlier this year, the DOT cryptocurrency was trading for around $10, now in November, just a few months after it reached the value of $56, a 460% increase in less than a year, today it ranks as 8th most valuable crypto with a market capitalization of $49 billion. 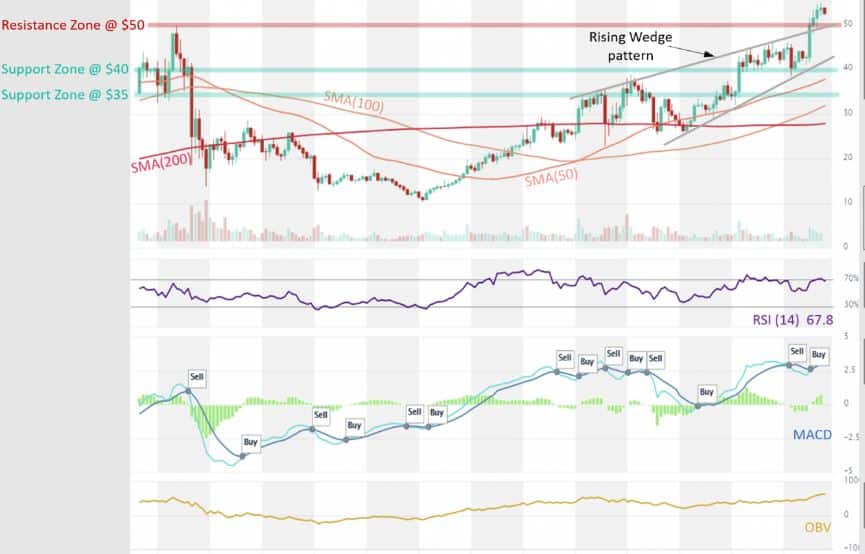 Trade setup: Bullish Breakout from a Rising Wedge pattern and above $50 resistance. Upside potential to $60. The recent move was sparked by the announcement of para-chain auctions.

Trend: Uptrend across all time horizons (Short- Medium- and Long-Term).

Momentum is Bullish: ( MACD Line is above MACD Signal Line and RSI is above 55).

OBV (On-Balance Volume): is rising, indicating that volume on Up days is greater than the volume on Down days. Hence, demand (buyers) exceeds supply (sellers).

Cardano platform is based on smart contracts and allows the development of dApps (decentralized applications).

Launched in 2017 by Charles Hoskinson, co-founder of Ethereum and BitShares, the cryptocurrency uses PoS (Proof of Stake) as a consensus protocol, a term that means proof of participation.

This year in January, ADA was trading at $0.35 and went to $3 in September, which is an increase by almost 1000% in just 9 months, reaching a market capitalization of approximately $95 billion. Today, Cardano (ADA) is trading at about $2 and is ranked 6th most valuable coin.

Many are betting on Cardano, and for sure, once dapps started to run on Cardano, it will have a much higher valuation, it is a genuine project to have in the portfolio for the long term. 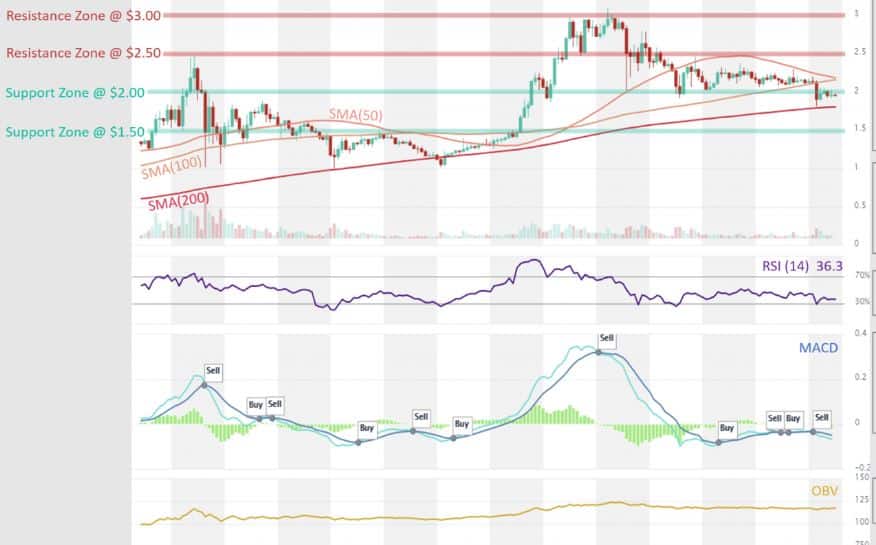 Trend: Downtrend on Short- and Medium-Term basis and Uptrend on Long-Term basis.

Momentum is Neutral: MACD Line is below MACD Signal Line, and RSI is below 45, but a long consolidation is proving that a large upward move is coming as the market is trading bullish.

OBV (On-Balance Volume): is flat, indicating that volume on Up days is equal to volume on Down days. Hence, demand from buyers and supply from sellers are in equilibrium