Binance CEO Is Giving Away A Custom Dogecoin-Themed Tesla And $50,000 In Doge To Win The Hearts Of Annoyed Dogecoin Community 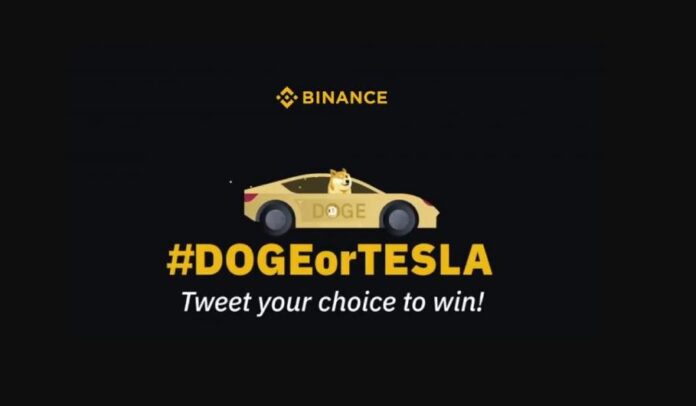 Binance CEO, Changpeng Zhao is giving away 50,000 in Doge and a Doge modified custom Tesla, Which one do you want??

While it hasn’t been mentioned which Tesla model will be awarded to the winner, it’s quite possible that Model 3 is in the $50,000 range. Currently, Tesla has four models, S, 3, X, and Y.

The relationship between Binance and Dogecoin users was troubled during the month of November. Earlier this month TheCryptoBasic reported that Binance was freezing its Dogecoin users’ accounts due to an internal error.

Because of banning Doge withdrawals, an influential supporter of Dogecoin, Elon Musk came forward to speak for the Dogecoin community and the Elon Musk Debate went hot over Dogecoin withdrawal issues with Changpeng Zhao.

After harsh responses between the two billionaires via Twitter, CZ tried to cool the fight as Binance was finally able to resume dogecoin withdrawals after almost 18 days. In an interview with Yahoo, CZ said that although he is a Musk fan, it was his job to defend his company while Musk is right in defending the Dogecoin community.

CZ is Giving Away A Custom Doge Tesla And 50,000 Worth of Dogecoins

CZ announced a giveaway via Twitter to win the hearts of annoyed dogecoin Binance users. CZ is giving away a personalized Dogecoin-themed Tesla and $50,000 in dogecoin.

To participate, you must comply with certain terms and conditions, such as following both Musk and CZ on Twitter, as well as the official Binance account and using the two hashtags #DOGEorTesla and #Binance. You must also have a verified KYC Binance account.

Our favorite answer from each 'team' will win. pic.twitter.com/A2VLB6fh4a

In this way, CZ is trying to make peace with both Elon Musk and the Dogecoin community. In addition, he also succeeded in doing great marketing for his exchange. His tweet already has 100,000 retweets, more than 65,000 likes and the video has got more than 2 million views.

Huobi announces increases the leverage up to 200X for BTC and ETH contracts after clearing out users in Mainland China. ...
Read more
Exchanges