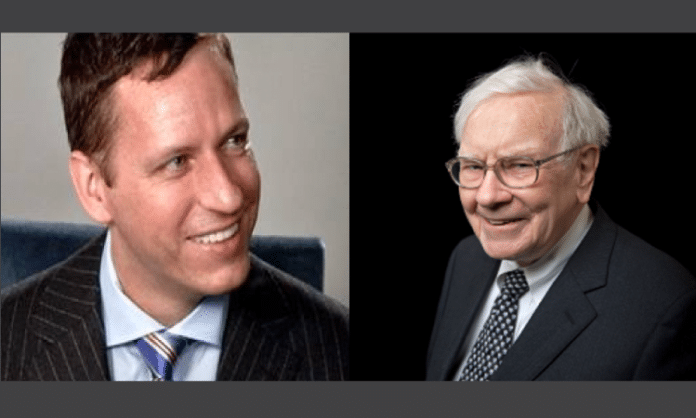 Lightning-rod venture capitalist Peter Thiel has called Warren Buffet a “Sociopathic grandpa” for being a critic of Bitcoin. Thiel said this at the Miami bitcoin 2022 event when he called the “Enemies List” of investors criticizing Bitcoin.

Warren was on top of the list for saying severally that crypto has no value. Others on the list were JP Morgan CEO Jamie Dimon and BlackRock CEO Larry Fink, about whom he said:

“We’re going to try to expose them, We need to keep them pushing back.”

He went on to call Buffett “the sociopathic grandpa from Omaha,” adding he was “enemy No. 1”

Thiel asserted that traditional investors should be allocating money to Bitcoin.

“When they choose not to allocate to Bitcoin, that is a deeply political choice, and we need to be pushing back against them,”

Peter Thiel is a long-term investor in Bitcoin and blockchain-based businesses, including crypto exchanges. He is also known to be a political activist in the Republican party. After co-founding PayPal, he left the company in 1998 and later co-founded Founders Fund and many other firms.

Bitcoin could go up 100x

Peter Thiel isn’t only pro-Bitcoin but is confident that the price of the digital currency can go up much more than its current level. The billionaire venture capitalist says the cost can still go up 100x over from the current price of $42,964.

He argued that for Bitcoin to go as high as 100x from here, there is a need for massive adoption, and Warren Buffet and others on the “Enemies List” will need to come on board for that to happen. This dream may become a reality as institutional investors have been coming into the crypto space in the last year.

According to Thiel, the war on Bitcoin is between the old anti-crypto people and the young generation of pro-crypto people, which must be won. “It’s a revolutionary moment. We have to go out from this conference and take over the world,” he said.

Bitcoin is the end of fiat

Bitcoin has made phenomenal progress as an investment in the ten years. Since its creation, the asset has gone up over 50 million percent, most of the growth recorded in the last three years. Thiel says that Bitcoin’s success is “telling us that the central banks are bankrupt. It’s “telling us that we’re at the end of the fiat money regime.”