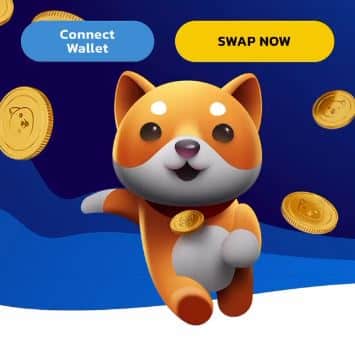 Following the footprints of the most popular dog-themed cryptocurrency and its rival Shiba Inu (SHIB), Baby DogeCoin declared the plan to launch its own decentralized exchange (DEX) named “BabyDoge Swap” via tweet soon after its NFT launch scheduled on 20th April 2022, at 4:20 pm EST.

As per the tweet, the Swap will have some unique features like increasing utility and burning of the token. However, further official details about the BabyDoge Swap and its special features are yet to be revealed.

Baby DogeCoin has also shared a 58-seconds demo video. The demo video comprises a glimpse of what BabyDoge Swap looks like and how it will work.

The Dex will require no registration and users would be able to trade hassle-free by connecting wallets to Binance smart chain.

After NFTs we will be dropping #BabyDogeSwap it has unique features we will be announcing shortly that support the use and increase burn of #BabyDogeCoin 👀 pic.twitter.com/3iAtS7TsPp

This demo video gives the community a strong indication that BabyDoge Swap is 100% ready and will be soon released following the public NFT mint.

Following Dogecoin and SHIB, Baby DogeCoin (BabyDoge) is the third most followed canine-themed meme cryptocurrency on Twitter, with 1.1 million followers.

The token also reached a major milestone of 1.50 Million holders. This milestone makes BabyDoge, the favorite token for retail investors compared to DOGE and SHIB. As per BscScan.com data, 619,670 unique wallet addresses are holding DOGE, while the holder count for Shiba Inu currently stands at 1,127,347 (1.12 Million), as per Etherscan.io data.

Moreover, since the start of the year 2022, BabyDoge has burned a whopping total of 17 quadrillion tokens worth over $54.3 million by sending them to the dead wallet.