Has Shiba Inu Lost Its Founder?

Ryoshi makes a surprise appearance after one year of disappearing by deleting everything.

The Shiba Inu (SHIB) community is curious to know what instigated Ryoshi, the project’s pseudonymous founder, to delete all his Twitter posts and Medium blog posts.

Ryoshi had been active on various social media platforms between when Shiba Inu made its official debut in August 2020 and May 2021.

Around this time last year, Ryoshi made his latest tweet on the microblogging platform Twitter and since then, no announcement has been made from his account.

With no post from Ryoshi’s account, many have wondered where the pseudonymous Shiba Inu founder has been, with different speculations made in a bid to ascertain what has kept him from public spaces.

Meanwhile, Shiba Inu’s lead developer Shytoshi Kusama has held things down for the SHIB community, releasing significant updates and information to the public.

When people started to get used to receiving updates from Shiba Inu’s lead developer, Ryoshi returned. However, this time, he came to delete all previous tweets made from his Twitter account.

Ryoshi did not stop there, he also deleted all posts made on his Medium page dubbed “All Hail The Shiba.” A quick search on Ryoshi’s Medium page would give the “410 Error,” with a message “User deactivated or deleted their account.”

He also changed his Twitter profile picture to an image of Buddhist Jetsun Milarepa, who is a Tibetan poet, while his header image was also changed to a picture of a half moon. 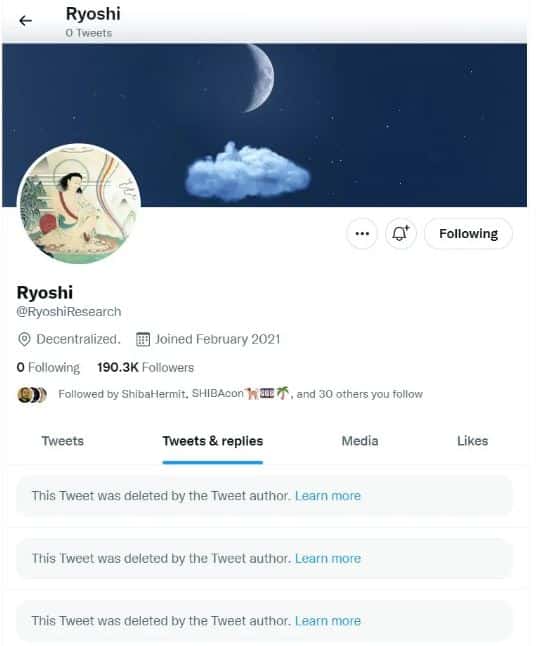 Community Debate on the Recent Development

With recent developments, the Shiba Inu community has weighed in on what prompted the latest actions from Ryoshi.

Many suggest that perhaps the pseudonymous founder is planning to make a major comeback and participate in the day-to-activities of the Shiba Inu project.

However, other users suggested that it could be that a malefactor has gained unrestricted access to Ryoshi’s Twitter and Medium accounts and subsequently deleted all his posts.

It is worth noting that Ryoshi had previously emphasized that he is replaceable and would disappear. The idea of deleting his Twitter and Medium blog posts could be his last move before cutting his ties to the project.

Milkshake the Shiba Inu team member quotes Ryoshi saying: “I am not important, and I will be gone without notice one day. Take the SHIBA and journey upwards frens.”

“I am not important, and one day I will be gone without notice. Take the SHIBA and journey upwards frens.” @RyoshiResearch

“Ryoshi was, and is, one of the most successful anonymous founders of any project…, we grow nearer to a completed Ryoshi’s Vision and realizing global decentralization, he would leave it up to us, The Shib Army…, Shib is Shib and we remain to grow far into the future following the path laid by our magnificent founder.

I salute and thank you Ryoshi!”

Either way, the community is awaiting the next move and hopeful that one of the Shiba Inu team members will provide more insights into what prompted the recent events. In general, the Shiba Inu community has acted neutral to the recent development.

Shiba Inu Asks Community to Suggest Tagline for Its Metaverse