Bitcoin is still struggling to break the 200-week Moving average (MA) that, if crossed, could trigger a run for $28k.

The world’s top crypto is apparently trying to gather steam after weeks of bear attacks. While Bitcoin seems to have gained a bit over the last 24 hours, the momentum is still not enough to push it significantly. At the moment, the coin is valued at just around $22,120.

However, this price point puts Bitcoin below the resistance level established at around $22,850, where 200-weekly MA acts as a strong resistance. That’s according to new data posted by Rekt Capital. Bitcoin must reach and breach this point to record any significant movement. 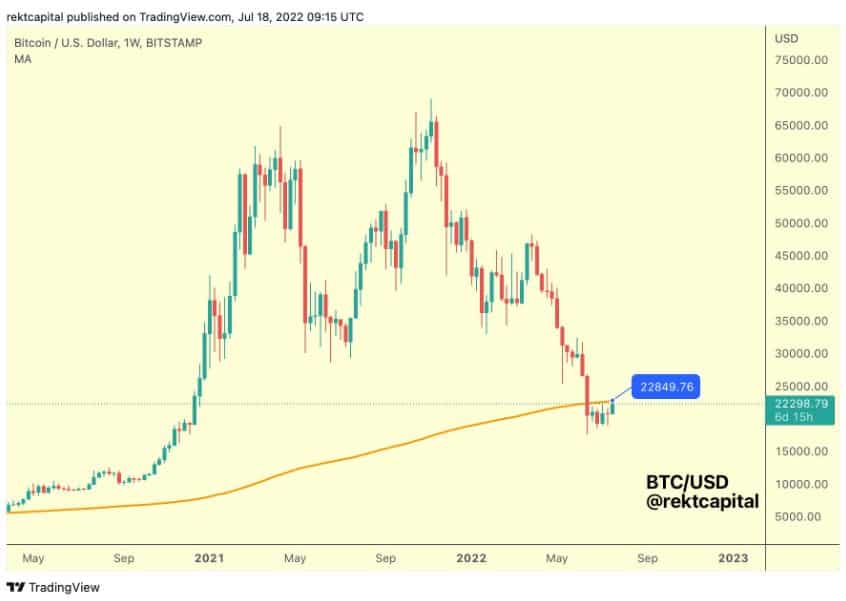 According to another famous trader, Michael van de Poppe, the current market setting doesn’t seem to favor any big continuation of the current push. In a tweet, Michael opined that range resistance, coupled with the situation below the 200-week MA, makes it hard for Bitcoin’s price to move upwards. However, he did offer an opinion on what could trigger a good movement.

Continuation Would Take Price To $28k

At the current price level, Bitcoin must consolidate to build up enough momentum for a bigger push. According to the trader, a slight consolidation could give the coin enough steam to break above the resistance at around $22.6k and make a dash for the $28k range.

Not expecting continuation on #Bitcoin, at this point, as we're facing 200-Week MA & range resistance.

Slight consolidation would trigger continuation and break above $22.6K would activate massive longs towards $28K.

Granted, Bitcoin isn’t the only coin in the market to experience stagnation. As a matter of fact, numerous other cryptos have seen high volatility and bottomed out at over a 90% downturn from their previous ATH. The situation was made worse by the collapse of Terra Luna and UST a few weeks ago. However, going by what experts say, the Bitcoin market is still optimistic.