Bloomberg Chief Commodity Expert, Mike Mcglone Says That Bitcoin May Still Hit $100,000 In 2021, According To Him He Has Underestimated One Thing And That Is Funds Are Leaving Gold For Bitcoin

Bloomberg leading commodities strategist, Mike McGlone provides a reason why the Bitcoin still has a chance of hitting the $100,000 price line by the end of the year, despite the recent Bitcoin correction.

He admitted that there is one important thing about Bitcoin that he underestimated this year, which is the reallocations of gold to BTC and Ethereum.

Bloomberg Intelligence's @mikemcglone11 says he underestimated the reallocation of capital from #gold to #bitcoin $BTC and Ethereum $ETH this year.

In his recent interview with Stansberry Research, McGlone admitted that he underestimated one thing about BTC and gold in particular: How much money continues to flow out of gold is converted into Bitcoin and Ethereum.

For Bloomberg’s experts, this means that the two leading cryptocurrencies are taking over gold. Bitcoin specifically does this as it has a strictly limited supply of 21 million coins, of which fewer than three million are left to mine, compared to unlimited supply of gold.

Mike McGlone believes the Fed and the US government will do their best to maintain the unlimited supply of fiat currency by providing other types of financial incentives to businesses and ordinary people.

According to McGlone In this battle, where BTC has a limited supply and fiat currencies with their potentially unlimited supply, Bitcoin is likely to win.

He added that many investors have either switched their funds from gold to Bitcoin or Ethereum, or put BTC and ETH in the same basket as gold.

Recently Microstrategy CEO, Michael Saylor said: “If I Had Chosen Gold Instead Of Bitcoin Last Year, It Would Have Been A Multi-Billion Dollar Mistake”

As the chart shared by Microstrategy shows, if MicroStrategy would have invested in Gold rather than Bitcoin, the over $2 billion initial investment would have lost 80% of its value in one year. 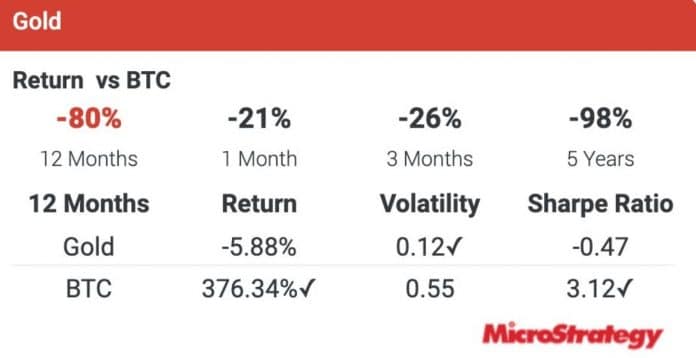