Binance CEO Changpeng Zhao”CZ” Zhao has revealed a note sent to the Binance team across all countries, as he asks the team not to trade FTT amidst proceedings of the FTX buyout deal.

CZ has asked the Binance team globally not to engage in any trades of FTT as the exchange continues with its due diligence exercise amidst proceedings to acquire FTX. The Binance chief noted that those who already have the asset in their portfolio could keep holding it but charged everyone not to buy or sell it.

“As the due diligence for the deal is ongoing, I want to remind everyone: DO NOT trade FTT tokens. If you have a bag, you have a bag. DO NOT buy or sell,” CZ demanded in a note sent to the Binance team globally. The 45-year-old Chinese-Canadian executive shared the note publicly “in the spirit of transparency.” 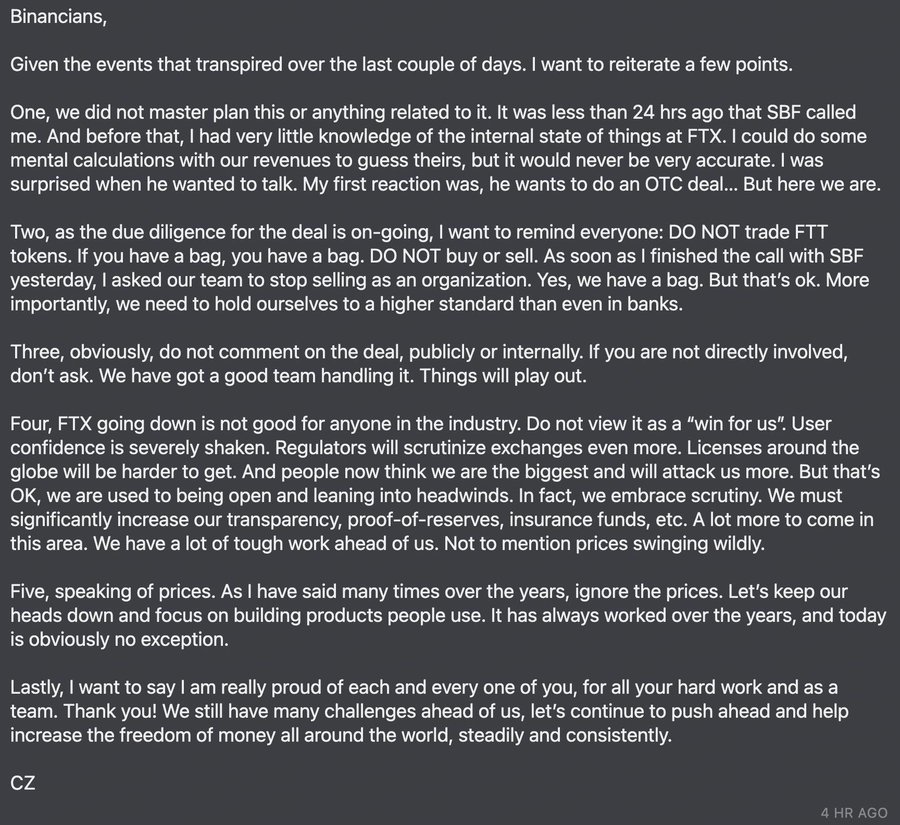 CZ also revealed that he had asked the Binance team not to engage in any form of selloffs of its FTT holdings as an organization. According to him, this order was made immediately after he concluded his call with FTX’s Sam Bankman-Fried yesterday. “Yes, we have a bag. But that’s ok,” he said in the note.

Zhao’s charge to the Binance team spells out the need for a noninvolvement in trades relating to FTT as the exchange looks to acquire FTX. Additionally, retaining its FTT holdings as an organization would contribute to the strength of the asset at such tumultuous times. This contrasts with Binance’s initial decision to liquidate its FTT holdings.

Furthermore, CZ demanded that employees not make any remarks on the ongoing buyout deal, whether within the organization or in public. He also charged those uninvolved in the proceedings to not ask questions, as a team is already responsible for handling it.

Despite being at the center of the situation, Zhao noted that he does not feel an FTX collapse is good for anyone within the cryptocurrency space, which is an undeniable fact, given how the recent debacles have rocked the industry and put investor confidence to the test.

CZ highlighted several reasons behind his claim, including potentially higher scrutiny from regulators, the impact on investor confidence, and the fact that Binance will be more prone to attacks from entities who have a glimpse of the exchange’s reach.

CZ also mentioned that his intentions were not to mastermind the current situation surrounding FTX. He noted that he had very limited knowledge of the condition of things at FTX before a call from SBF occurred less than 24 hours ago.

Recall that Zhao revealed, in a series of tweets Sunday, that Binance is looking to liquidate its FTT holdings due to recent revelations. The disclosure precipitated a massive wave of FUD into the space, leading to FTT selloffs and an FTX bank run as investors sought to withdraw their funds.

As The Crypto Basic recently reported, amid the chaos, SBF reached out to CZ to offer a bailout deal to see Binance acquire FTX. Notwithstanding, the situation’s impact on the price action of FTT has remained evident, as the asset has tanked by 70% in the past 24 hours to trade at $4.50 at the time of reporting.

The prevailing situation also had a massive impact on SBF’s billionaire status, as the American entrepreneur lost over 93% of his net assets overnight, with his net worth declining to $991M.