What is the meaning of Bitcoin Halving?

Bitcoin halving is described as an event in which the rate at which new bitcoins are created halves. It occurs every four years.

As many know, the Bitcoin cryptocurrency (BTC) supply is limited. As soon as 21 million coins are produced, the network will no longer produce anymore.

Read Also: What is Bitcoin and How Does it Work

Just like yellow metal, there is only a restricted amount worldwide, and one day everything will have been derived completely and there will be no Bitcoin cryptocurrency left to mine

There are currently around 18 million BTC in circulation, which is approximately 85% of the total circulation supply. However, this does not mean that the Bitcoin crypto will soon reach its ends.

After Every 210,000 blocks are mined called Bitcoin halving, the production of new coins becomes more difficult

If not interested in reading, you may watch a video

How long does it take for Bitcoin crypto to halve?

Since an average of 6 blocks is found within an hour and the halving occurs once every 210,000 blocks are mined, so by this calculation halving takes place every 4 years.

This fundamentally means that mining wages become 50% lower than before.

For example, if every miner receives 12.5 bitcoins to solve a block, they will only receive 6.25 bitcoin cryptocurrency after the next halving event and so on. 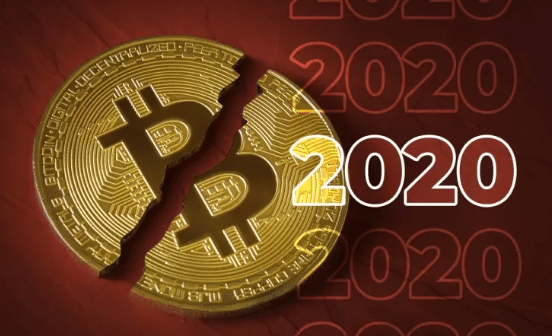 What is Bitcoin Halving 2020? Or When the next Bitcoin halving will be taking place?

So now as the concept of bitcoin halving is clear let’s have a look at Bitcoin Halving 2020.

The specific date of the halving is not yet known because the time to generate new blocks varies.

The network calculates an average of one block every ten minutes. The average date can be 18th May 2020

How much Bitcoin miners will get after the next halving?

Each new block makes 6.25 BTC. In the beginning, the reward was eight times as high.

When Bitcoin hit the market in 2009, the miners received 50 BTC per block.

It may seem like an overly generous bonus of over $ 365,000 per block based on the current value

But the network has only just started to progress and, no one knew for sure whether people would still believe the concept worthy to invest their computing power in the Bitcoin blockchain to keep it alive.

Another factor to consider is that the all-time high for that period was $ 31 per BTC  in June 2011, but the bubble burst later and bitcoin was back at $ 2 before year-end.

Although, mining eventually turned out to be much more profitable for those who started early

This is a major reason why Bitcoin critics call it the Ponzi program.

The second bitcoin halving took place on July 6, 2016, when block number 420,000 was created and miners started collecting 12.5 BTC for each new block, which is the current rate.

The third halving will halve this rate again, decreasing the block reward to just 6.25 BTC, or about $ 45,000, given the current market price.

Will the Bitcoin price change after Bitcoin halving 2020?

Bitcoin cryptocurrency is currently displaying a 3.88% inflation rate and miners are dumping 1800 of Bitcoin Cryptocurrency on daily basis

After the halving, we will drop to under 2% inflation and will only be able to buy 900 new BTC per day

which may lead to an uptick in price if the demand for Bitcoin cryptocurrency persisted the same as the supply will decrease to half after Bitcoin halving 2020.

In the past, the price rose after halving but conclusively depends on the relationship between supply and demand.

If there is demand, the price is likely to rise.

About four years later, a month before the second halving, the Bitcoin price reflected a similar bullish pattern.

The day the block’s reward was cut in half for the second time in the asset’s history.

Will it be the same this time?  The industry has evolved dramatically in the past four years as cryptocurrencies and especially Bitcoin cryptocurrency have become an imperative part of mainstream news.

Still, some people may be motivated to take the gamble, especially given the previous patterns that have been announced concerning Bitcoin halving.

If history repeats itself and bitcoin prices rise in April 2020, more traders may buy the asset for fear of missing it, arousing demand and ultimately price.

How can I trade bitcoin halving 2020?

The easiest way is to buy Bitcoin Cryptocurrency is directly through an exchange like Binance exchange or any other prominent crypto exchange.

If you choose this choice, you will need to set up an Exchange account

Any profits would also be taxable in the usual way.

Can I make money by halving BTC?

Yes, it will be probable to make money with the BTC halving by speculating on Bitcoin’s price moves in the weeks and months connected with the event.

However, it is important to learn that all forms of trading involve risks.

So while there are chances of winning, you should never risk more than you can afford to lose.

How often is Bitcoin halving occurring?

The halving takes place at interims of 210,000 blocks, which is the case approximately every four years.

Bitcoin miners currently receive 12.5 Bitcoin cryptocurrency if they successfully mine a block.

Will the mining of Bitcoin crypto Ever End?

Mining will be required as long as Bitcoin cryptocurrency exists.

How many Bitcoins are left to mine?

According to data from Blockchain.info there are 21 million bitcoin in total supply and only 4 million are left to mine

Out of 21 million 17 million bitcoin, cryptocurrency have been mined

What is a Block reward for Bitcoin miners?

The amount of BTC a miner takes for each new block he adds to the blockchain.

To illustrate this concept in more detail, we briefly return to the roots of Bitcoin cryptocurrency – the blockchain.

In the simplest sense, a blockchain is a digital general ledger, in which information about its transactions is stored in blocks of approximately 1 MB each.

For example, if Person A sends Bitcoin to Person B, that transaction is saved in a block along with about 500 other transactions that took place at about the same time.

A block reward is the amount of cryptocurrency, miners win when they successfully mine a new block by solving highly complex math problems with their mining hardware.

It is a prize for their hard work.

Will Bitcoin miners continue to be interested in mining, even if their reward is halved after Bitcoin halving 2020?

Some smaller players may be forced to leave the game or at least upgrade their hardware.

At this point, most of Bitcoin’s mining is done by giants like Bitmain

The China-based company that was worth $ 12 billion in 2019, application-specific integrated circuits that are costly and demand a lot of energy and technical skills.

If the block reward becomes less relevant, mining facilities that hardly cover production costs have to flee the market.

There will still be companies willing to mine Bitcoin cryptocurrency at the reduced rate, but this could make the market less decentralized.

Nonetheless, new and more effective ways of extracting BTC could emerge that may allow smaller companies to participate.

Can Bitcoin Survive Without Miners?

Without miners, the Bitcoin cryptocurrency blockchain will not remain functional

How many Bitcoin cryptos are lost?

Chainalysis, a research company that scrutinizes activity in various cryptocurrency markets, predicts that  17 to 23 percent of all bitcoin cryptocurrency has been lost and will never be recovered

What happens when the last bitcoin cryptocurrency is mined?

When all of BTC will be mined these transaction fees should become so worthy that they will encourage miners to continue mining even if they don’t receive a mining block reward.

Bitcoin cryptocurrency miners will still be paid by transactions fees

Who operates the Bitcoin network?

Nobody owns the Bitcoin cryptocurrency network. Bitcoin is controlled by all Bitcoin users around the world.

As developers update the software, they cannot force the Bitcoin protocol to change because all users are free to choose which software and version to apply.