In recent times, popular dog-themed cryptocurrency project Shiba Inu (SHIB), which originally launched as a memecoin, has proven to be a utility token.

An Overview of Shiba Inu’s Growth

Shiba Inu has been able to achieve this feat by releasing significant upgrades and features that have made many consider to rank it among the most valuable cryptocurrencies in the market.

Some of the notable feats Shiba Inu has rolled out include a decentralized exchange named ShibaSwap, a non-fungible token (NFT) dubbed Shiboshi, and a metaverse project.

The project is also developing other initiatives like a play-to-earn (P2E) game and a burning portal that will ultimately reduce the total supply of SHIBs.

One of the most significant features Shiba Inu released this year is the first phase of its decentralized autonomous organization dubbed the Doggy DAO 1.

The initiative, which launched in mid-February this year, ultimately gave the decision-making process of Shiba Inu to the entire SHIB community members as opposed to just selected team members.

Through the Doggy decentralized autonomous organization, the Shiba Inu community can pool resources together and coordinate around common goals.

It is worth noting that since Doggy DAO was launched less than a month ago, the initiative has gained traction, with several users flocking to the platform to decide the future of ShibaSwap.

With the launch of Doggy DAO 1, the SHIBArmy, a title given to enthusiasts of Shiba Inu, will be able to decide the projects that will form its WOOF pools.

In other words, the community will determine the cryptocurrency and trading pairs that will be listed on the ShibaSwap WOOF Pools and how the $BONE rewards will be allocated among these pairs.

“This is a crucial first step, orienting our Decentralized Exchange to grow, while promoting all the benefits to the #ShibArmy from such pairs,” Shiba Inu said.

However, before participating in Doggy DAO-related activities, users will be required to stake some amounts of the $BONE cryptocurrency, in order to earn the $tBONE tokens, a digital currency considered as the voting power in the Shiba Inu ecosystem.

As stated in the official post, the Doggy DAO Phase 1 platform will contain a list of top liquidity/trading pairs from ShibaSwap, with users expected to vote on any of the pairs they are interested in.

Each week, a set of 48 trading pairs from ShibaSwap are selected for Shiba Inu holders to choose from. The first week for the Doggy DAO pair for the week of February 18 to February 25, recorded a total number of 2,303.

The second voting exercise for the pair voting week of March 13 to March 26 is still ongoing. A total of 48 trading pairs have been listed for the Shiba Inu community to choose from.

The 48 listed trading pairs for the ongoing voting week include: 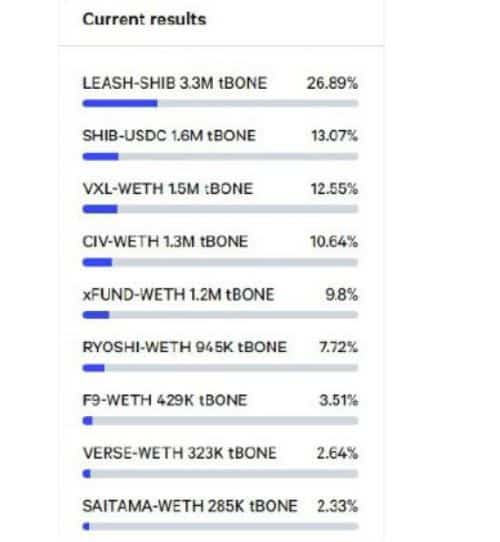 The voting for the new week started on March 7, 2022 and it is scheduled to end on March 12, 2022. At the time of writing this line, the current winning trading pair is LEASH/SHIB.

Interestingly, Voxel X Network, which ended in the fourth position during the last voting exercise, has shown resilience in the current trading pair ranking.

At the time of writing this line, VXL has amassed a total votes of 1.5 million $tBONE, which puts it directly in the third position.

There is a huge possibility that the VXL/WETH pair could overtake SHIB/USDC to become the second most voted trading pair since the margin between the duo is relatively small.

It is worth noting that the higher the trading pair ranking, the higher its $BONE reward APY would be.

While community members will be allowed to vote on pairs, Shiba Inu noted that the “guardians 6/9 wallets” would have the final decision over the pairs’ reward allocation, approval, and onboarding into ShibaSwap.

The measure, according to Shiba Inu, would prevent scams by overviewing the process of autonomy.

Shiba Inu Doggy decentralized autonomous organization would ultimately give the SHIBArmy the voting rights over the entire roadmap of the Shiba Inu ecosystem, the trading pairs of ShibaSwap, as well as the allocation of the $BONE rewards among these pairs.

The Shiba Inu DAO will be launching in phases, with the first beta version making its debut mid-last month.

Each phase of the Doggy DAO will be intended for different purposes. For now, the first phase requires the community to vote on trading pairs that will determine the allocation of $BONE rewards among them.

Shiba Inu disclosed that the subsequent phases will see the community make generic proposals, which can be considered among all relevant stakeholders.

If the proposals are heavily supported by the community, they could be added to the SHIB roadmap.