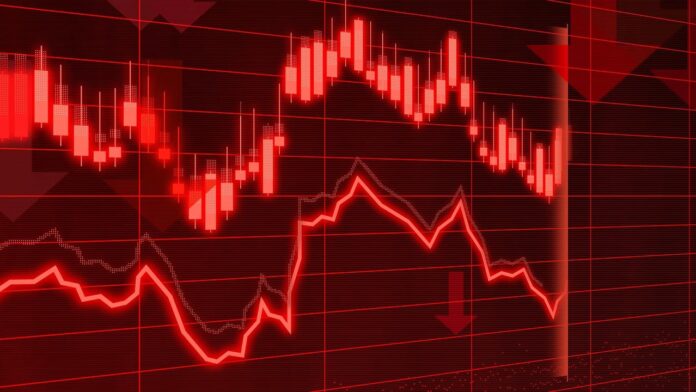 The Fed has been discussing the possibility of a rate hike lately and is considering raising the rate by 50 basis points. As a result of the development, the crypto market and Nasdaq have seen significant corrections.

Nasdaq has so far fallen the hardest in the stock market, losing 4.5% in two days. Bitcoin, the top cryptocurrency, has also dropped by 5% in the last 24 hours. Many other leading cryptocurrencies, including Ethereum, which has been rallying, have dropped.

Recently, Fed officials have widely discussed the inflation situation and the possibility of the Fed raising interest rates by 50 basis points. The Nasdaq fell the most, down nearly 4.5% in two days. Bitcoin has also lost 5% in the past 24 hours.

Bitcoin has been range-bound for days, trading between $46,000 and $47,000 before the crash, bringing the price down to $43,000. This indicated almost equal strength between the bulls and bears. The rumors of the rate hike only led to the bearish bias that crashed the price.

This is no surprise because the crypto market has been correlated with the stock market for a long time. Though there have been times of decoupling, this usually does not last, so trends in major stocks have historically affected the crypto market.

The S&P500 is also showing signs of weakness since the announcement of the Fed’s decision to implement multiple rate hikes in 2022. This led to the recent fall in Ethereum as the cryptocurrency was tightly correlated with the American stock index.

Following the planned rate hike, the selling pressure on the crypto market has opened a door of opportunity for smart investors to buy the dip. This is usually the case whenever such corrections occur.

It is not clear when the market will bounce back, but its correlation with the stock market means it will recover if the stocks start to do better or when there is a new development in the space that turns the sentiment into a bullish one. For now, most cryptocurrencies are in the red as many of them depend on Bitcoin’s price behavior.

Popular billionaire investor and CEO of Galaxy Digital Holdings, Mike Novogratz, has made yet another optimistic prediction for top asset class Bitcoin (BTC).

According to the Galaxy Digital boss, the price of Bitcoin will surge tremendously once the United States apex bank, Federal Reserve, “takes a pause.”

Novogratz said he believes the Fed will raise interest rates by up to 50 points to reduce inflation rates.

Novogratz said the U.S. economy would slow down if this happened, prompting the apex bank to step back a little.

“I go to bed, and I pray that the stewards of the U.S. economy don’t screw it up […] I pray that the dollar is going to be strong and it doesn’t go to infinity because Bitcoin going to infinity means the rest of the Western world has fallen apart,” Novogratz as reported by TheCryptoBasic.