The wait is almost over. The much-awaited Shibarium Beta is about to launch “very soon,” as per the lead SHIB developer, Shytoshi Kusama.

In the tweet, Kusama reported meeting with Unification XFUND’s team about Shibarium Protocol. He further confirmed that they are ready to align, onboard, and finalize the essential elements for the successful Shibarium Beta launch very soon.

A day before in a telegram chat Shytoshi Kusama clarified that Shibarium – Layer 2 Solution will launch in phases and the team won’t rush to release the final version of the protocol. 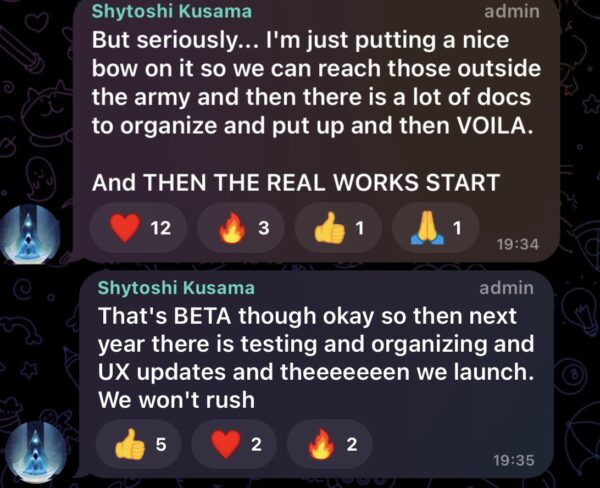 The launch will be a “Beta version” of the Protocol, and the testing phase might extend to one year. In the Beta phase, many UX updates will frequently happen to improve the functionality of the network. After all the improvements needed have been made, the Shiba Inu team later, along with Unification XFUND, will launch the final version of Shibarium – Layer 2 Solution.

On the other hand, one of the top SHIB developers, named “SHIB Trophias” stated that all that is left to do before the beta launch is to release the documentation.

“first was the website, then docs, then beta, from what I know,” the developer wrote in the shared message.

It should be noted that the Shibarium – Layer 2 Solution Beta was first scheduled to launch in September, but due to some technical issues, the launch has been postponed, however. The exact release date of the potential launch of Shibarium Beta is still unknown.