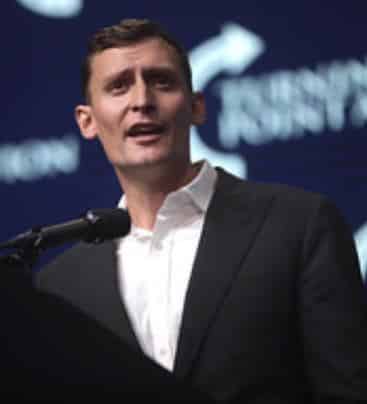 According to recent filings, Blake Masters, one of the most prominent Republican candidates for the 2022 Senate race in Arizona has more than $1 million worth of Cryptocurrencies.

Masters, who is a close friend of billionaire Peter Thiel, recently suggested the US government should purchase Bitcoin as a reserve asset for strategic purposes.

Alongside bitcoins, the 34-year-old tech executive has an extensive collection of altcoins in his portfolio, which includes Ethereum, Dogecoin, Litecoin, Zcash, and more.

“His cryptocurrency holdings are indeed intriguing: He reported between $1.47 million and $6.19 million worth of assets across nine cryptocurrencies, including bitcoin, bitcoin cash, dogecoin, ether, file coin, litecoin, tezos, and zcash. This makes Masters one of the most heavily cryptocurrency-invested congressional candidates.”

Also, he is a holder of physical silver and gold.

Read: Bank Of America Report Shows 27% Of The United States Population Will Be Using Crypto In 2022

On the 7th of October, Senator Cynthia Lummis (R-WY) also made a statement about a purchase of up to $100,000 in bitcoin.

Read: Bloomberg Believes SEC May Approve Four Bitcoin ETFs For The First Time By The End Of October

The former presidential candidate Andrew Young, who recently quit his relations with the Democratic Party and founded the PAC Forward Party, described himself as a “big supporter” of Bitcoin.

Texas Senator Ted Cruz has also come up as a supporter of the cryptocurrency industry.


But the former President Donald Trump, who undoubtedly is the most powerful Republican despite his unsuccessful reelection bid, is still anti-crypto. In his most recent conversation with Yahoo Finance, he suggested that crypto might threaten the US dollar’s position as the global reserve currency.

Read: Gary Gensler Confirms That SEC Has No Plans To Ban Crypto, But Congress Could